Bollywood megastar Salman Khan has requested World Champion Nikhat Zareen to not knock him out after India’s newest sporting sensation announced her public proclamation of love for Bollywood’s bhai. 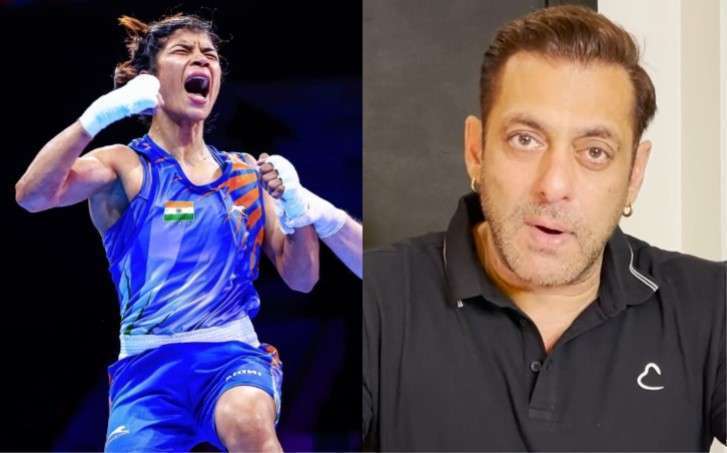 Reacting to Nikhat’s adulation for him, Salman had tweeted on Friday, “Congratzz on this gold Nikhat … @nikhat_zareen.”

Buoyed by her screen idol’s personal message, Nikhat had written on Twitter, “Being a die hard fan girl, It’s one of my favourite dream that has come true. I could never believe that @BeingSalmanKhan would tweet for me. I’m so much humbled. Thank u so much for making my win more special . I’ll savour this moment forever in my heart.”

A gracious Salman then replied, “Just don’t knock me out 😂😁. Lots of love .. Keep doing what u doing n keep punching like my hero Sylvester Stallone….”

Just don’t knock me out 😂😁. Lots of love .. Keep doing what u doing n keep punching like my hero Sylvester Stallone…. https://t.co/u8C74LpgMp

India’s Nikhat Zareen created history by winning the Women’s World Boxing Championships in Turkey on Thursday. By doing so, Zareen become only the fifth Indian woman to achieve this coveted feat on Thursday.

Recalling the taunts his daughter faced for wearing shorts, father Jameel said that people would often raise objections to a Muslim girl wearing shorts to play sports. He, however, said that the family soon learnt to ignore them. “But when she won the youth championship, people changed their minds and said she’d proven herself,” Jameel was quoted as saying by BBC.

This is India’s first World Championship Gold since Mary Kom won in 2018. Zareen had lost to Olympic medallist Kom during the trials and could not represent India at the last year’s Tokyo Olympics.