Jasprit Bumrah and Mohammad Shami wreaked havoc on Tuesday as India thrashed England by 10 wickets in the first One Day International, being played at the Oval cricket ground in London. 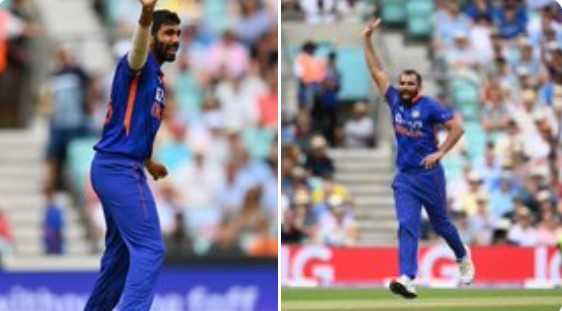 Batting first, England were all out for 110 in 25.2 overs with Jasprit Bumrah wreaking havoc with his devastating fat bowling. Bumrah finished with a spell of 6-19.

India achieved the target without losing any wicket in 18.4 overs with Rohit Sharma playing the skipper’s knock of 76 not out from 58 balls. Shikhar Dhawan remained unbeaten at 31 from 54 deliveries.

Bumrah, who was declared Player Of The Match, said after the match, “When there’s swing and seam movement, it is very exciting in white-ball cricket to get that opportunity because you have to be defensive with the kind of pitches we usually get. When I bowled the first ball, I found some swing and we tried to exploit that. When it doesn’t swing, I have to pull my lengths back. When the ball is doing something you don’t have to try a lot. As soon as Shami bowled the first over, we had a conversation to go fuller. Very happy for him, he gets a lot of wickets. When the ball is moving around, the keeper and the cordon is very active. Very happy that Rishabh has been working hard on his keeping as well as his batting.”

England skipper Jos Buttler said that it was a ‘very tough day to take.’ He, however, said that his side needed to ‘dust’ themselves down quickly. “Little surprised by the movement, bit muggy. India exposed the conditions superbly. They have bowled really well in the powerplay. It is something we need to discuss and work out. Jasprit is a great bowler to come up against. He has bowled well today and deserves these figures. It is never easy when you are forced to try and wickets. Isn’t nice when your bowlers have to take as may risks and when you ask so much out of them,” Buttler said after the match.

Sharma, for his part, said, “Looking at the overhead conditions and the pitch, the toss was a right call to make. We used the conditions upfront really well. We never worry about the conditions because we have got the guys who can just come out and use those conditions. There was some swing and seam up front and we exploited them well. When you play in such conditions, you have to understand the assistance and have field placements accordingly. The hook is a high-risk shot, I understand that, but as long as it comes out right, I am happy.”

The next match of the series will be played at the Lord’s cricket ground on 14 July.