In a dramatic development, the chilling video of Uvalde School in Austin, Texas, has been leaked and the development may cause further embarrassment to the officers from the local police department. In the video, officers could be seen approaching the classroom where 18-year-old Salvador Ramos shot dead 21 people including 19 students and two teachers. However, they all are seen retreating after hearing the gunshots. 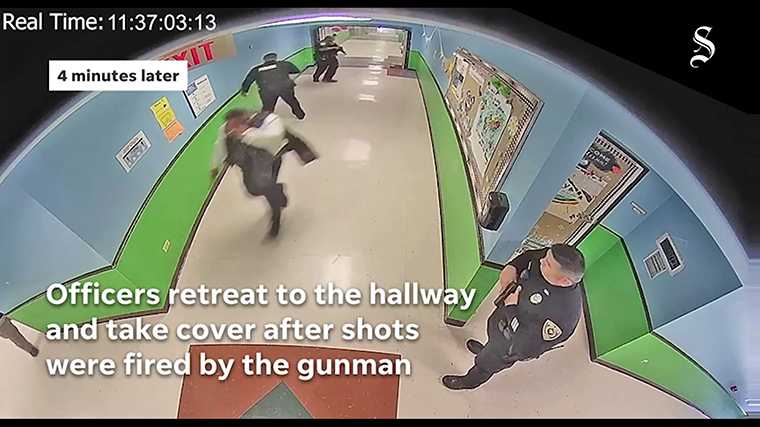 The five-minute-long video shows teachers screaming in panic as Ramos crosses the parking lot of Robb Elementary School after crashing a truck just outside the property. The killer is seen entering the hallway without any resistance. Ramos then enters the classroom and starts firing indiscriminating. A small child is seen running to save his life.

The video was obtained and published by Austin American-Statesman newspaper on Tuesday. The newspaper said that it deliberately removed the sound of the child’s screaming.

The video published by the local newspaper also shows cops approaching the classroom, but then retreating down the hallway and taking cover when gunfire is heard.

Also Read: Who Is Uvalde School District Police Chief Pedro “Pete” Arredondo? Why Did He Resign?

The role of local police had come under sharp scrutiny after it emerged that they failed to intervene on time. Their timely intervention could have saved 21 lives.

The video is very graphic in nature and we advise viewers to exercise caution since the effect can be damaging emotionally.

Last week it was reported how Uvalde school district police chief Pedro “Pete” Arredondo had stepped down from his position on the Uvalde city council. His resignation had come come days after the mass shooting left 19 students and two teachers dead at Robb Elementary School. The role of the district police had come under sharp scrutiny after the massacre.