Indian Idol judge Neha Kakkar was left stunned on Sunday night after a transgender guest of Sony TV’s singing reality show prayed for her pregnancy. Left blushing by the sudden wish, Neha had no clue on how to react to the transgender’s wish. However, Bharti Singh of The Kapil Sharma Show used the opportunity to request the guest to make a similar wish for her as she was desperately praying for the arrival of a baby girl in her life by the end of this year. 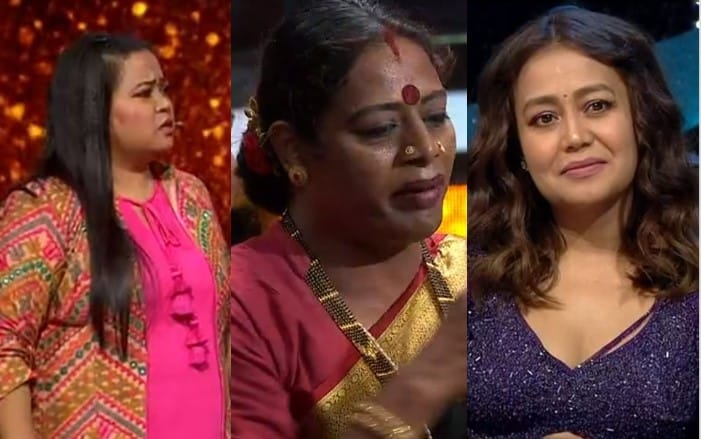 “Especially Neha ma’am. You’ve just got married. Congratulations from us. May God fill your life with all the happiness.”Gesticulating that the Indian Idol judge be blessed with a baby, the guest prayed for a ‘new’ arrival in Neha’s life, leaving her red-faced.

The transgender in question then turned towards Neha’s co-star Vishal Dadlani and said, “But I wouldn’t spare him (Vishal) today and will force him to throw a party. I wouldn’t leave the show without taking a treat from him.” Vishal replied promptly, “You wouldn’t have to ask (for the party) again.”

Bharti, who was filling in for Aditya Narayan with her husband Haarsh Limbaachiya, said, “Haarsh, we long to meet them (transgender guests).” The laughter queen told her guest, “Please bless us as well so that we too are blessed with a cute daughter this year.”

The guest said, “May God bless you with a baby soon so that we can visit you for our reward.”

It’s common practice for transgenders in India to visit families, blessed with newborns, seeking gratuity on happy occasions as they perform a dance to celebrate the arrival of the baby.

This is not the first time that Bharti had wished for a daughter. In January this year, The Kapil Sharma Show actor had revealed that she was praying for a daughter as she appeared on the Indian Idol with husband Haarsh. Also joining them were Neha Kakkar and husband Rohanpreet Singh.

As for Neha, she had left the country for her honeymoon when she played a prank by announcing her pregnancy days after her marriage. It later emerged that the said pregnancy was to promote her upcoming music video featuring the newlywed couple. This had left her fans fuming, many of who felt that the singer should have avoided playing a prank about something so personal.