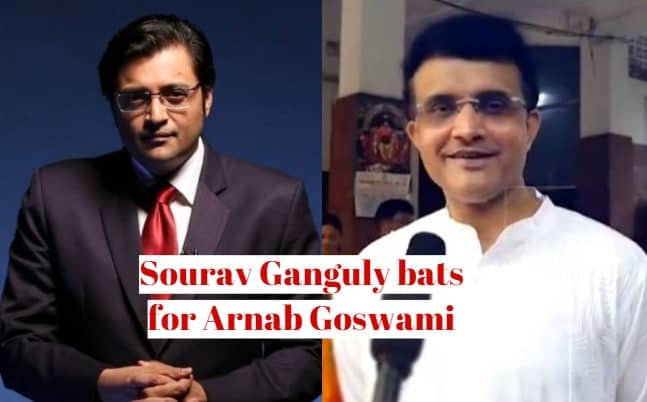 Cricket fans were left incensed given Goswami’s perceived image as a hatemonger, whose TV channel has often faced allegations of spewing hate targeting the Muslim community. Several cases were filed against him in Mumbai last year seeking Goswami’s prosecution after he was accused of inciting religious hatred during his coverage of the Palghar lynching of Hindu priests and the COVID-19 pandemic.

In a video, Ganguly could be seen wishing success to Goswami’s Republic Bangla TV. “A lot of good wishes to Republic TV. They are coming to Bengal for the first time,” Ganguly said in a video message. He continued, “Good wishes to Arnab too. I am told that their tagline is ‘will talk looking in your eyes.’ It feels good every time something new comes to Bengal. One more good Bengali TV has arrived.”

No sooner did the video of Ganguly promoting Goswami emerge, Ganguly began to face grief from fans with some even calling him a ‘shameless person.’

Sourav Ganguly is BATTING for Republic TV & Arnab Goswami. What a Shameless Person He Is. Thoooo!! pic.twitter.com/vp9fqPZK3z

i still can’t get my head around the fact that dada @SGanguly99 is vouching for arnab and republic who rejoiced over our soldiers being martyred in pulwama. i feel so not having “won like crazy” ? ?

What BJP failed to do Arnab did it. He got Sourav to promote his channel ?

Ganguly had recently faced incessant social media trolling and was called a ‘coward’ after he thanked Prime Minister Narendra Modi and BJP President Amit Shah for the inauguration of a cricket stadium in Ahmedabad. Fans had called Ganguly a ‘coward’ for his admiration for Modi and Shah and silence on a cricket stadium being named after a living politician, Modi in this case.

Last year, Ganguly had caused quite a flutter after he stunned everyone by arriving at the Governor’s house in Kolkata for an unscheduled meeting. Governors in India are BJP workers before they are appointed to hold constitutional posts just like the Congress appointed its own functionaries to this role in the past.

Days later, Ganguly was seen sharing the stage with Amit Shah to unveil a statue of late BJP leader Arun Jaitley at the cricket stadium in Delhi. While Ganguly is the president of the Indian cricket board, Amit Shah’s son, Jay Shah, is the secretary of the board.