In a considerable insult to Rajat Sharma, Twitter on Sunday removed two tweets posted by the Indian TV founder claiming that the World Health Organisation had approved Ramdev’s Coronil. The truth was that the WHO had not approved any such vaccines. Faced with growing outrage from experts and activists and demand for the banning of Sharma’s Twitter account for peddling fake news, the social media giant deleted his controversial tweets on Sunday afternoon. 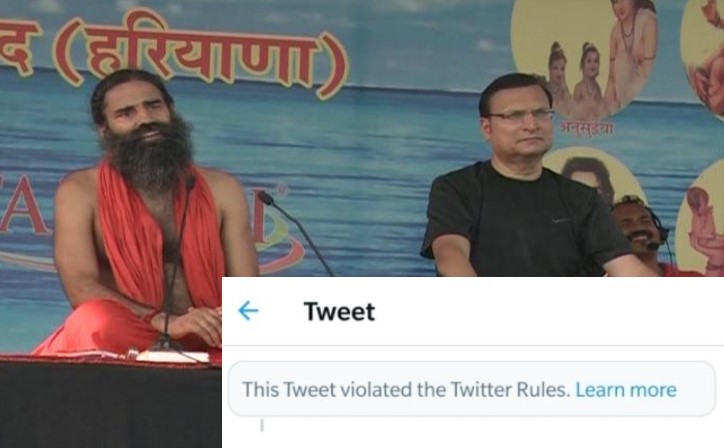 The message in place of his earlier tweets now reads, “This Tweet is no longer available.”

Sharma had shared two tweets, one each in Hindi and English with an identical caption, to claim, “As second wave of Covid pandemic looms, Ramdev’s Coronil gains acceptance from WHO.”

This came even as the WHO had on Friday made it abundantly clear that it did not approve any vaccines, let alone approving Ramdev’s Coronil as claimed by Sharma. A tweet from the WHO South-East Asia’s official Twitter handle had read, “.@WHO has not reviewed or certified the effectiveness of any traditional medicine for the treatment #COVID19.”

Journalists and activists tagged Sharma on Twitter to draw his attention to the fake news he had peddled, but he did not appear to be in any mood to delete his social media posts and apologise for misleading millions of gullible Indians.

No sooner did the news of Twitter deleting Sharma’s tweets emerge, Twitterati began to inundate the social media platform with criticism and memes against the controversial TV anchor.

Twitter has removed this for violation. We demand permanent suspension of this promoter of @PypAyurved masquerading as journalist. @TwitterIndia @jack https://t.co/bntgKMnQe5 pic.twitter.com/7h4UQ2OmOG

Removed by Twitter, not deleted by callous Rajat Sharma

Much to Sharma’s embarrassment, even Patanjali MD, Balkrishna, had tweeted clarifying that the WHO had not approved his company’s Coronil. But Sharma remained adamant and refused to delete his tweets until Twitter decided to heap public shame on him by removing them from his timeline.