Actor Diljit Dosanjh has taken a dig at those, who questioned protesting farmers being fed with pizzas with an epic response. This came days after his public spat with Kangana Ranaut, who had slammed him and Priyanka Chopra for extending their support to farmers protesting against the three Farm Laws passed by the government. 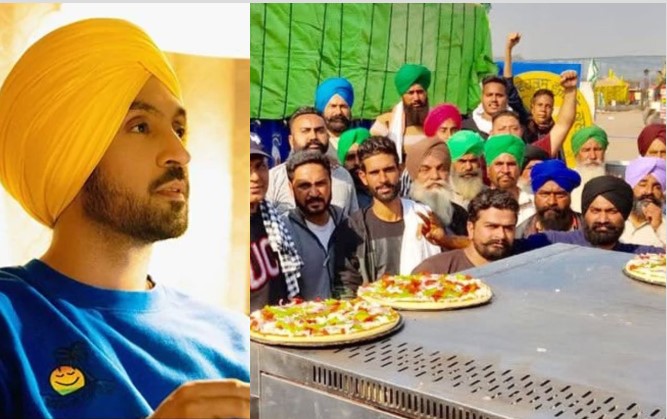 Diljit, who is reported to have donated a whopping Rs. 1 crore to buy winter gear for the protesting farmers, took to Twitter with a message that read, “Farmers consuming poison was never a concern but farmers eating pizza is news.”

Diljit’s epic dig was aimed at those, who had raised questions on pizzas being served to feed farmers, currently camping at the Delhi-Haryana border. Those attacking the move were largely the supporters of the Centre’s Narendra Modi government. However, their criticism for farmers for eating pizzas had backfired spectacularly.

Last week, volunteer groups had made arrangements for thousands of pizzas and facilities for foot massages for those protesting at the Delhi-Haryana border in the freezing cold. This had prompted the supporters of the government to claim that the extraordinary protest by farmers had been hijacked by powers with vested interests. However, many had taken to social media to counter those claims saying that it was an insult for our farmers to question their right to eat pizza.

Full video : #FarmersProtests
why #No #FarmersWithModi ji !
Pizza logic & the billionaire lifestyle of Fakeer Modi saheb!
Jai Shah saheb can be a member of BCCI but a Farmer can’t wear Jeans!
Btw Did any family member of Modi Saheb or Amit Shah saheb serve our army or do farming? pic.twitter.com/ZaW8CtStex

Who is funding this ?

Diljit had become a hero for taking on Kangana earlier this month after the pro-BJP actor insulted two elderly women namely Bilkis Bano of Shaheen Bagh and Mahinder Kaur of Punjab with a defamatory tweet, which is now been deleted. Kangana had also slammed Priyanka Chopra after the Quantico actor shared Diljit’s tweet to extend her support to the farmers.