Producer Ekta Kapoor on Wednesday issued an apology to journalist Justin G Rao on behalf of the much-reported rude behaviour by actress Kangana Ranaut earlier this week. But far from pacifying people, her apology letter left many incensed as they slammed the filmmaker for omitting Kangana’s name. 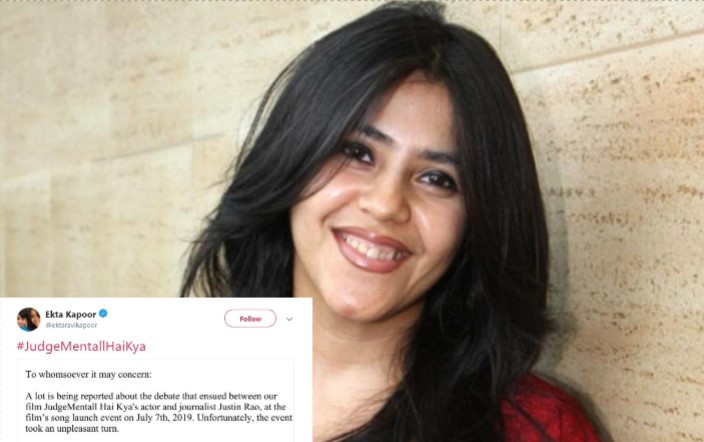 Ekta’s apology statement read, “A lot is being reported about the debate that ensued between our film ‘JudgeMentall Hai Kya’ actor and a journalist, at the film’s song launch event on July 7. Unfortunately, the event took an unpleasant turn.

The apology from Ekta came hours after the Entertainment Journalists’ Guild of India threatened to boycott Kangana for intimidating a journalist by falsely accusing him of running a smear campaign.

Ekta concluded her apology by stating, “We would like to maintain that our intention was not to disrespect or hurt anyone’s sentiments.

However, no sooner did she post her apology on Twitter, many were left incensed for her decision to only refer Kangana as the ‘actor.’ User Radhika Bhirani asked, “Why has the journalist been named and not the actor? Biased apology.” User Mike Mehta wrote, “We need unconditional apology from #KangnaRanaut not from @balajimotionpic or @ektaravikapoor.” User JustSay75 commented, “The fearless lady fears to mention kangana even once !! What kangana did was down right unprofessional, immoral, unethical and clear act of bullying and exploitation with baseless serious allegations maligning a person’s moral ground, character and professionalism.”

During the launch of a song from Ekta’s upcoming film Judgementall Hai Kya, Kangana had intimidated a journalist from news agency PTI accusing him defaming her despite enjoying a meal with her inside her vanity van for three hours and even texting her later. When the journalist challenged her to produce evidence to substantiate her allegations, she was seen stuck for words.