Legendary stock market investor Rakesh Jhunjhunwala passed away in Mumbai on Sunday at the age of 62. Leading Indian personalities have condoled the death of Jhunjhunwala, who also founded Akasa Air. 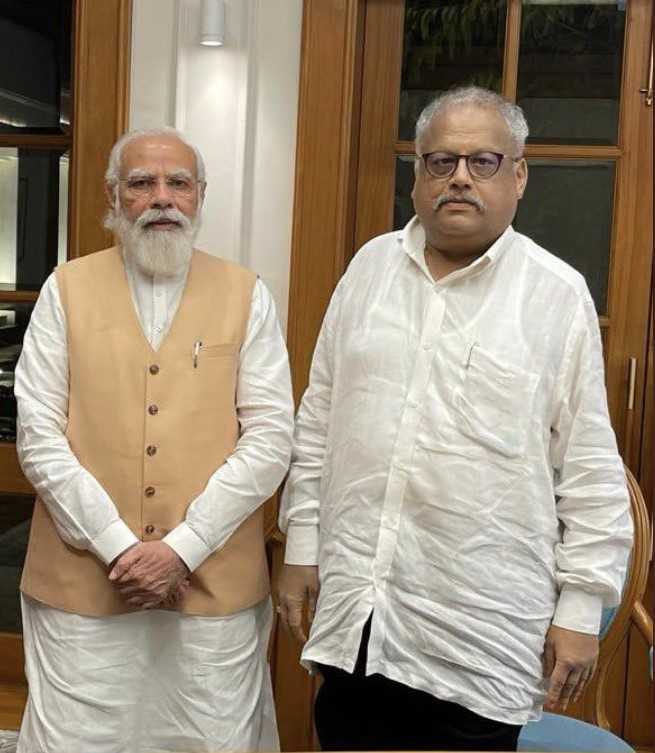 Known as the Big Bull of the Indian share market, Jhunjhunwala was taken to Mumbai’s Breach Candy Hospital, where he was declared dead on arrival at 6.45 AM.

Prime Minister Narendra Modi tweeted, “Rakesh Jhunjhunwala was indomitable. Full of life, witty and insightful, he leaves behind an indelible contribution to the financial world. He was also very passionate about India’s progress. His passing away is saddening. My condolences to his family and admirers. Om Shanti..”

Industrialist Naveen Jindal tweeted, “Shocked and saddened to hear of the demise of Shri #RakeshJhunjhunwala. An ace investor and a simple straightforward man, Shri Jhunjhunwala leaves behind a legacy that will continue to inspire many. My deepest condolences to his family, friends and loved ones. Om Shanti.”

Deepak Shenoy, founder and chief executive officer (CEO) of Capitalmind, wrote on Twitter, “A trader, investor and legend that inspired many. He played the short and long side, and made his peace with the market. He will be remembered fondly. Condolences to his family.”

Jhunjhunwala was believed to have a net worth of $5.5 billion.

He founded Akasa Air, which took off earlier this month. When asked why he decided to invest in the aviation industry at a time when it was going through a rough phase, Jhunjhunwala had replied, “I say I’m prepared for failure.”