Janta Ka Reporter 2.0
Home Blog “Chhapaak, true to its name, splashed us with a refreshing take on...

Well, yes, it’s a film about Acid Attack survivors and their grit but it’s a lot more than that. Keeping aside the controversies against Deepika Padukone’s democratic right to go wherever she wishes, Chhapaak must be watched for many other reasons. 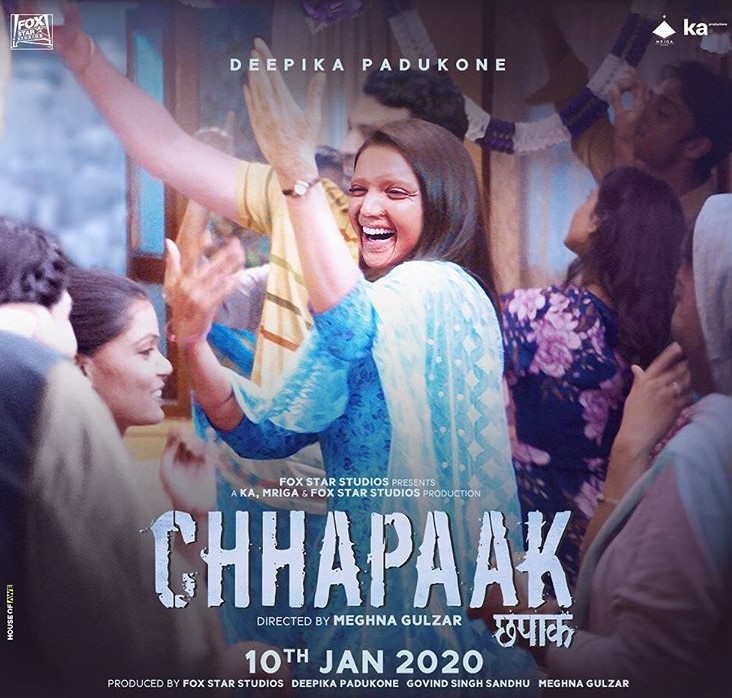 My husband and I went to watch it last evening. I was looking forward to it while he wasn’t sure. He is admittedly someone who gets affected by films and has, in the past, been caught wiping a tear or two from the corner of his eyes in movie theatres.

He said straight up, ‘I don’t want to cry!’ I knew what he meant but he still wanted to watch the film for what it would bring to the existing micro-discussion about acid attack survivors. He didn’t have to cry during the film. I did. But both of us were blown away by the mastery with which Meghna Gulzar deals with the subject.

The script is tight and doesn’t leave room for sogginess. Each time Malti smiles, it’s clear that the world has not nose-dived into complete despair. The lightness of the narrative balances the depth of the acid wounds and makes the film an entertaining watch. Sighs from the audience were accompanied by frequent smiles. I saw my husband smiling when Malti’s ‘silent love’ is reciprocated while she and Amol stand in a bus with the word divyang brightly painted as a background to the most romantic scene of the film.

Although for me, the film was about multi-layered inequality that plagues our society. It is this inequality which youngsters are trying to battle by their nation-wide protests. There are gaps in our society which are highlighted subtly in the film.

The obvious one is the inequality which physically scarred girls face in a society which favours only “fair and lovely” people. There is another one which lies at the base of an acid attack: girls who are trying to do away with whatever inequality they find themselves in. Those trying to improve their life by getting better education or by simply being themselves in a world which doesn’t want women to express themselves at all.

These women and girls are shown their place by throwing acid on their life and dreams. The film also talks about class and caste inequalities in the case where a so-called lower caste girl is given the acid treatment when she tries to study software engineering. It seems as if the society wants to preserve a difference in the level of happiness which some people ‘can’ feel. Women who try to be happy by stepping out, by studying further, by getting a job, by spreading their wings in any way whatsoever, have been given the acid attack treatment as a means to burn their wings. But the film doesn’t harp long on this reality and moves on with its head held high. The only time where Malti’s tears shook my heart was in the end when the final verdict is meted out: two simple tears from the corner of her left eye were enough to establish the craftsmanship of the director.

But my favourite part is the difference between the expressions of joy of Malti and Amol. While Amol has the typical ‘intellectual’, pensive take on life, Malti is uninhibited in spreading her crooked dimpled smile. The famous line where she says, ‘Ab khush hu toh kya karu?’ is a testimony of the human spirit. Why mustn’t we celebrate the small mercies which life shows not infrequently? Chhapaak, true to its name, splashed us with a refreshing take on a dark issue. The over-thinkers like me and the let-goers like my husband have pleasant takeaways from the film.