IAS topper Tina Dabi has decided to share her wedding album from the second marriage with Dr. Pradeep Gawande. Some of the fans were quick to detect a glimpse of her first marriage with Kashmiri IAS topper Athar Aamir Khan. 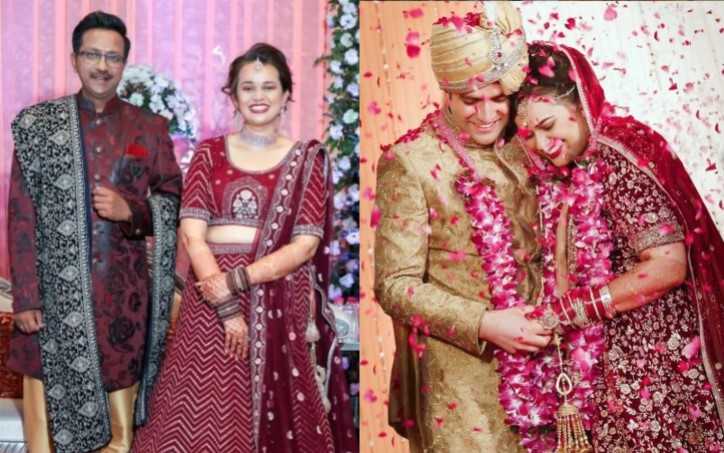 Sharing the photos, Tina wrote, “Finally, my wedding album is here! Happy to share those memorable days with you all ✨Dated: 21st and 22nd April 2022.”

In the photos, Tina was seen getting mehndi applied on her as Pradeep looked on. In another photo, Pradeep was seen joining his well-wishers in the dance on the happy occasion. In one photo, both Pradeep and Tina were seen attired in white matching ethnic outfits as they had their marriage solemnised in a traditional Buddhist custom.

Just like her first marriage with Athar, Tina had chosen a red lehnga choli for the occasion.

Sharing another almbum, Tina wrote on Instagram, “Finally, my wedding album is here! Happy to share those memorable days with you all ✨ Dated: 24th April 2022.” This was seemingly from the couple’s reception party held in Jaipur where both of them are currently posted as civil servants of the Rajasthan government.

Tina had opted for a dark blue lehenga choli for her reception, while her husband went for matching sherwani and a white ethnic trouser.

In contrast, Tina had once again gone for red-dominated lehenga choli during the reception of her first wedding. One of those receptions was held in Delhi, where several high-profile Indian politicians including India’s Vice President Venkaiah Naidu were guests.

Tina, her husband and Ria had deactivated their Instagram accounts immediately after they began to face trolling. They returned to social media platforms later and have been updating their fans about the goings-on in their lives.

Tina had secured All India Rank 1 in 2016 in the UPSC Exam. Athar had secured All India Rank 2 the same year. Both fell in love during their training in Mussourie and got married in 2018. However, both filed for a divorce with mutual consent in 2020 and formally split a year later. Athar, who was also posted in Jaipur, later opted for a transfer to Srinagar, his home city.