An extraordinary online petition demanding fans to boycott Karan Johar, Yash Raj Films and Salman Khan has garnered close to 40 lakh signatures and counting. The petition has been launched to protest against the prevalent phenomenon of nepotism in Bollywood. Many blame nepotism for the tragic death of Sushant Singh Rajput, who was considered to be an outsider despite having starred in several critically acclaimed and commercially successful films such as PK, Kai Po Che, Kedarnath and Raabta. This has come amidst angry fans vandalising Salman Khan’s Being Human store in Sushant’s home town Patna. 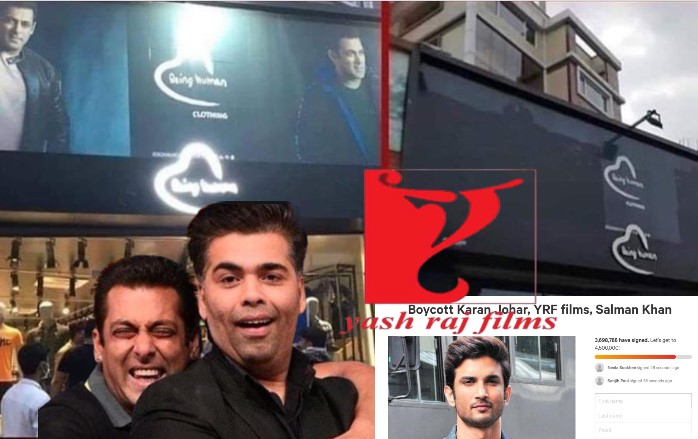 The online petition titled Boycott Karan Johar, YRF films, Salman Khan reads, “We the people want to collectively raise our voice against the practice of nepotism in Indian cinema (“Bollywood”), which has increasingly become a brutal reality. Bollywood is not an oligarchy (ruled by the few) but is a democracy. In this petition, we ask popular streaming companies such as Netflix, Amazon Prime, and Hot star to immediately stop promoting movies generated by the above mentioned media houses. These are not movies, these are platforms to launch children of famous movie stars. These are not movies, there is evidence that nepotism is running rampant in the industry.”

Meanwhile, videos of angry fans vandalising Salman Khan’s Being Human store in Patna have gone viral on social media. In one video (watch below), fans are seen demanding the shop owner to remove Salman Khan’s photo from the signboard.

[Viral]
After a trail of protests in #Patna against the prevailing nepotism in the bollywood industry , Salman Khan’s photo was removed from Being Human Showroom situated on the Boring road in Patna ? pic.twitter.com/n6WWy1H794

Meanwhile, a report by news agency PTI said that Yash Raj Films on Saturday had submitted copies of the contract signed by late actor Sushant Singh Rajput for their upcoming projects to the Mumbai Police.