British Prime Minister Boris Johnson and his wife Carrie faced the anger of British public firsthand as they arrived to take part in Queen’s Platinum Jubilee celebrations at London’s St. Paul’s Cathedral. Johnson had arrived at the venue with his wife Carrie for a Service of Thanksgiving for Queen Elizabeth, who is celebrating 70 years as Monarch. No sooner did the couple emerge out of their car, than the angry crowd began to jeer and boo them. The booing and jeering for the British prime minister continued even when they came out of St. Paul’s Cathedral after the thanksgiving service. 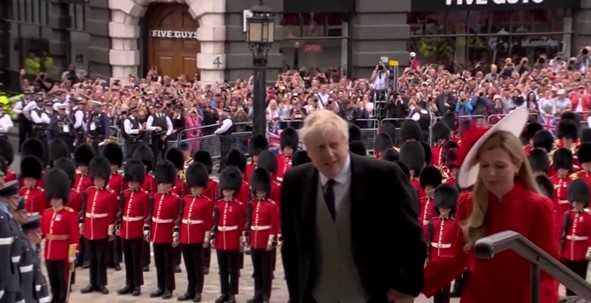 Johnson and his wife did not react to the constant booing as they smiled at each other. the event was being televised both BBC and Sky News. Reacting to the booing, BBC President Jane Hill said, “There is really quite a lot of booing actually, a substantial amount.”

Johnson, who found guilty of violating the lockdown rule that he himself formulated during the second wave of the pandemic, is facing widespread anger from the British public. More than two dozen of MPs from his own party have formally asked for his ouster and there are speculations that Johnson could face a no-confidence motion next week.

One of the charges against Johnson is that he deliberately lied in parliament by denying that he ever took part in parties even when the public gathering both inside or outside one’s house was banned. Photos of Johnson boozing and cutting birthday cakes emerged later. One of those parties in question took place on the day the Queen was mourning the death of her husband, Prince Phillip, alone from a distance in compliance of the lockdown rules.

Johnson was repeatedly asked about those parties but he vehemently denied on all occasions until the police found him guilty and imposed financial penalties on him, his wife and his cabinet colleague Rishi Sunak.

What has become the topic of intense social media discussions was the defence put up by Johnson’s cabinet colleague, Nadine Dorries, who tweeted, “There were far, far more cheers, but that doesn’t make a good headline does it. Queen’s thanksgiving service: Boos and jeers for Boris Johnson outside St Paul’s.”

As expected, Dorries began to face public ridicule for her bizarre defence of Johnson.

Whatever you say Nads… https://t.co/LLMdHk1Mll