The Birmingham 2022 Commonwealth Games kicked off with a show-stopping Opening Ceremony at the newly redeveloped Alexander Stadium in Perry Barr to a live audience of over 30,000 and a global audience of over a billion. The highlight of the event was Nobel Laureate Malala Yousafzai making an emotional speech to thank Birmingham to give safe refuge to her and her family members. 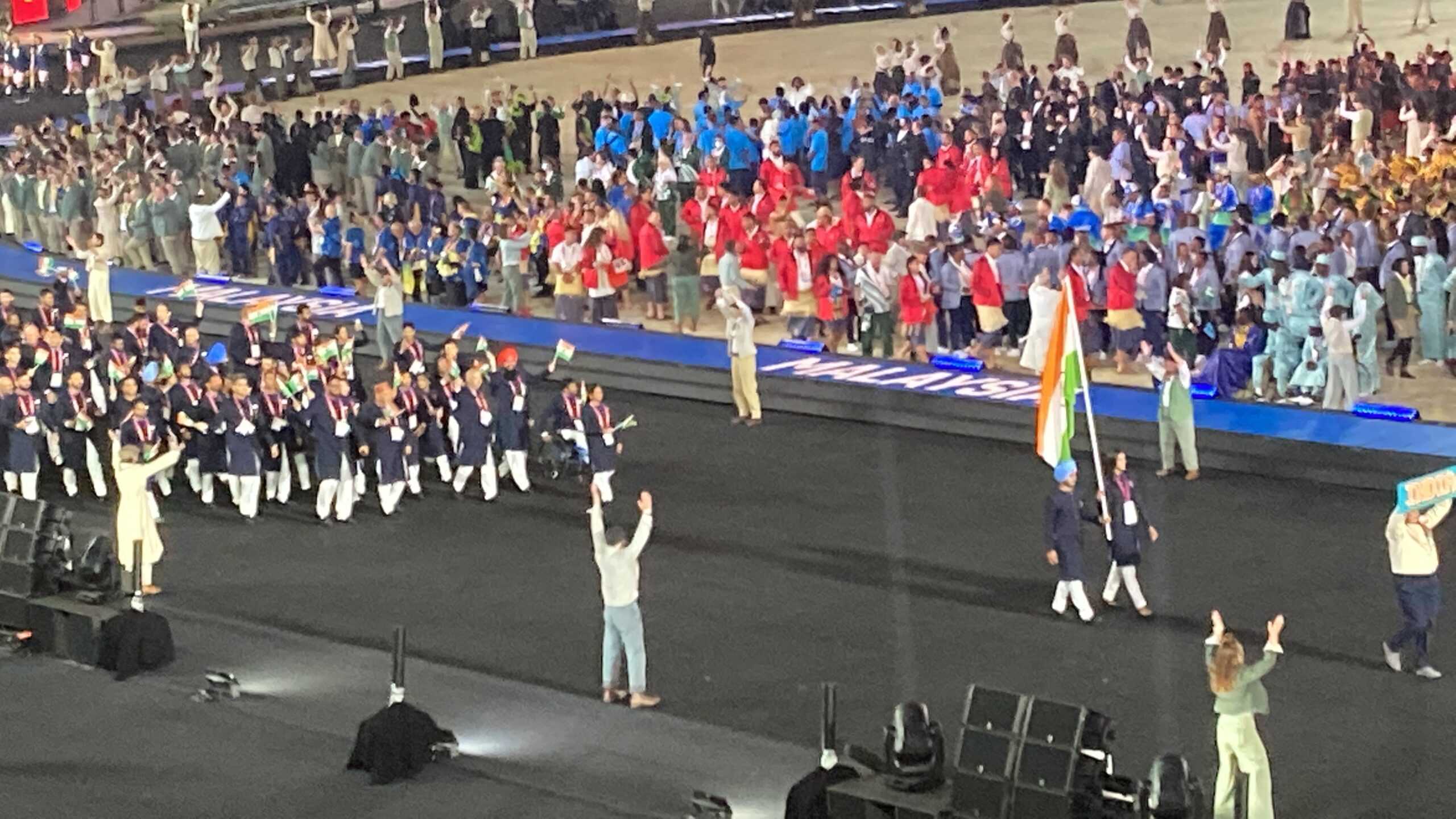 Before Malala took the centrestage, a message in her voice was played laying emphasis on girl education as she quoted a verse from the Holy Quran on the big screen.

India contingent proudly walked even though Neeraj Chopra’s absence became obvious. The Olympic Gold medallist, who was meant to be the flag-bearer in the opening ceremony, recently pulled out of the event citing injury.

The Opening Ceremony welcomed this year’s athletes with a theatrical narrative exploring the rich and diverse history, culture and identity of Birmingham and the West Midlands. From early manufacturing and industry, through to innovation and cultural revolution, Artistic Director Iqbal Khan challenged not only conventional expressions of storytelling, but also the way Birmingham sees itself.

Brought to life by ‘Stella and the Dreamers’ – a group of young athletes from around the 72 Commonwealth nations and territories – the Opening Ceremony recounted the city’s past experiences and how it continues to move forward, responding to new cultural and generational influences.

Featuring over 1,500 professional and volunteer cast members, the Opening Ceremony evolved over 10 moving scenes beginning with the gathering of the Commonwealth’s ‘Shards’ – symbols of hopes and dreams, illuminated by 18,480 LED lights.

In a memorable tribute to Her Majesty The Queen, Birmingham Conservatoire graduate and mezzo-soprano Samantha Oxborough performed the National Anthem, supported by the celebrated City of Birmingham Symphony Orchestra under acclaimed conductor Alpesh Chauhan, while musicians from The Royal Marines deliver a rousing trumpet fanfare.

These rich musical moments and cultural stories set the stage for iconic British band, Duran Duran to draw the Opening Ceremony to a close, performing four much-loved tracks from their remarkable catalogue.

Throughout its history, Birmingham has been enriched by its embrace of generations of Commonwealth communities, emerging as the multicultural city that it is today. The Birmingham 2022 Commonwealth Games’ Opening Ceremony was full of moments of inspiration and wonder, celebrated together with friends from across the Commonwealth in a reminder that there is truth and delight in challenging yesterday’s version of events in order to be fully and authentically ourselves.

The Opening Ceremony signals the start of 11 days of spectacular sport, with 4,500 of the Commonwealth’s finest athletes competing across 19 sports and eight para sports, in the largest event ever to be staged in the West Midlands region.

The Closing Ceremony will take place on Monday 8th August at Birmingham’s Alexander Stadium in a further celebration of the Commonwealth Games and its 2022 host region.

Artistic Director and acclaimed theatre producer, Iqbal Khan, said, “I am a proud son of Birmingham, born to Pakistani parents growing up in Small Heath. My parents traveled to embrace opportunities. They negotiated serious challenges here. Their strength and legacy is imprinted in me and this place.

“During the show, I wanted to explore themes of home and how our expressions of where we are from resonate across the Commonwealth family. Developing this theme has also allowed us to tell the story of how Birmingham has been enriched by its embrace of generations of Commonwealth communities, emerging as the vibrant, multicultural city that it is today.

“The last few years have reminded us all about how close we are to our families and friends, but also how separated and isolated we can feel. The Birmingham 2022 Commonwealth Games is a moment where we can truly return to each other, to recognise and celebrate our differences, and enjoy what we share. I hope you will all find moments of inspiration and wonder in our show and, together with our friends across the Commonwealth, remember that there is truth and delight in challenging yesterday’s version of things – in order to be fully, authentically ourselves today.

“Brummies are unique people. We have amazing creative talent right across the West Midlands. Our show is dedicated to and made from the spirit of our community volunteers who will bring tonight’s show to life – from volunteer performers to those behind the scenes.

“In this Opening Ceremony, we are bringing Birmingham to the world.”

Chief Creative Officer, Martin Green CBE, said, “This is Birmingham’s turn on the world stage as we throw the doors wide open to welcome the Commonwealth, celebrating the people and creativity that make this incredible city, through art, ideas, and innovation.

“I’m delighted that the rich musical heritage that’s woven deep into the fabric of this place is at the heart of this generation-defining show, as cultures collide, genres blend and audiences come together to celebrate what it means to be Brummie.”