A huge row has erupted over Congress leader Adhir Ranjan Chowdhury’s ‘Rashtrapatni’ remarks for President Droupadi Murmu. The matter dominated the Lok Sabha proceedings with Congress accusing Union Minister Smriti Irani of indulging in ‘indecent behaviour’ towards its president, Sonia Gandhi. The BJP, for its part, has hit back alleging that Gandhi threatened one of its MPs inside parliament. 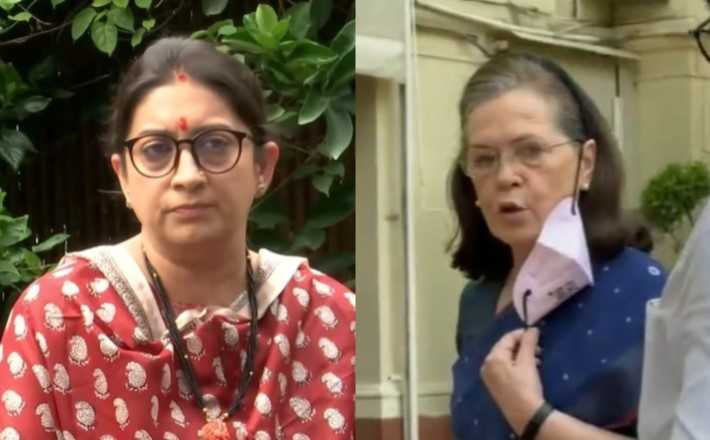 It all started with Congress leader Jairam Ramesh lashing out at Irani in a tweet, which read, “Union Minister Smriti Irani behaved indecently and abusively in Lok Sabha today! But will the speaker condemn it? Are rules only for the opposition?”

According to reports, BJP MP Rama Devi had raised the issue of Chowdhury’s ‘Rashtrapatni’ comments for Murmu when Sonia Gandhi walked up to her to inform that the Congress leader had already issued an apology. While Gandhi was walking up to Devi, Irani reportedly interjected and asked the Congress president, “Madam, may I help you? I took your name.”

Irani was reportedly referring to her press conference earlier on Wednesday when she launched a tirade against Sonia Gandhi for Chowdhury’s comments. Congress leaders said that Gandhi was having a polite conversation with Rama Devi when Irani interjected in a menacing tone.

Union Minister Nirmala Sitharaman later told reporters that Gandhi had threatened one of its female MPs inside the parliament. However, her version was rejected by several opposition MPs including Trinamool Congress lawmaker, Mahua Moitra, and Shiv Sena’s Priyanka Chaturvedi.

Moitra tweeted, “Was in Lok Sabha when 75 year old lady senior leader encircled & heckled pack-wolf style when all she did was walk over & speak (masked) to another senior lady panel chairperson. Disgusted to read BJP lies & false version in press.”

Chaturvedi wrote on Twitter, “This is shameful and bully behaviour of BJP MPs. Has to be condemned by one and all, this hooliganism that was led by a hysterical minister who herself is facing charges of illegal operations in Goa, besides fake education affidavits should be called out.”

The controversy erupted after Chowdhury addressed Murmu as ‘Rashtrapatni’ while speaking to a reporter. He had, however, issued a public apology saying that this was due to a slip of tongue and not with any malice.

Sonia Gandhi was earlier asked whether she would ask Chowdhury to apologise. To which, she had said, “He’s already apologised.”