Shah Rukh Khan may have been absent during the first match of the 15th edition of the Indian Premier League between Kolkata Knight Riders and Chennai Super Kings, but his son Aryan Khan’s presence saw his team crush the team from down south by six wickets. 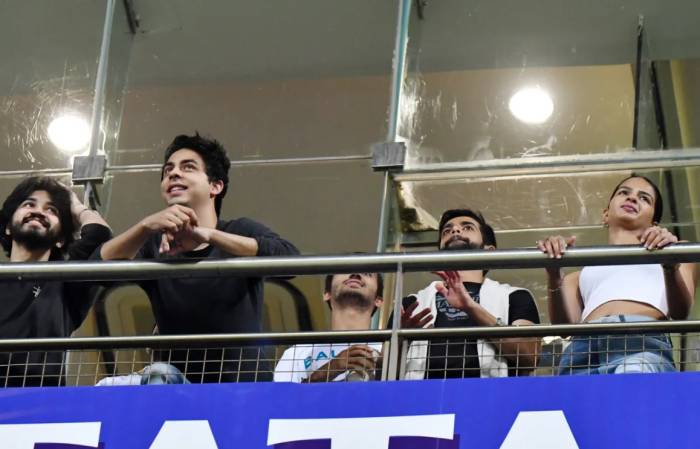 Batting first, Chennai Super Kings could only make 131-5 in their quota of 20 overs. Mahendra Singh Dhoni, who had stepped down as the CSK captain just before the start of the IPL, was the top scorer with a knock of unbeaten 50 runs. Dhoni’s successor, Ravindra Jadeja, remained not out at 26, while Robin Uthappa made 28.

Umesh Yadav picked up two wickets for the KKR by conceding just 20 runs in his four overs.

The KKR achieved the target by losing only four wickets in 18.3 overs. Ajinkya Rahane was the top scorer for his side with a knock of 44 runs. Dwayne Bravo
picked up three wickets by conceding just 20 runs in four overs.

Umesh Yadav was declared Player Of The Match for his impressive bowling. Reacting to his side’s win, Yadav said after the match, “Wickets in the powerplay is important and the Team’s role is what I carried out today. Usually I’ve been focusing on my rhythm and I’m thankful to my trainers for keeping me in shape.”

Jade said that the dew will play a key role in this edition of the IPL. “If you win the toss, you will look to bowl first. The wicket was a little damp in the first 6-7 overs and then it came on nicely in the back end of the innings. We were trying to take the game deep. Everybody bowled well given the dew, especially Bravo who bowled very well,” he said.

His KKR counterpart Shreyas Iyer said, “There is always tension when MS Dhoni is batting. I knew momentum was going to shift towards them with the dew around as it was difficult to grip the ball. Enjoying the new franchise and the CEO, management, support staff have all been outstanding. Mumbai is one place I love to play as I grew up here. I thought the wicket would be flat but it was pretty easy for me with the bowling lineup I had. Umesh has worked hard in the nets and did well in the practice games too. Really chuffed to see him perform today.”

Sunday will see two matches with Delhi Capitals locking horns with Mumbai Indians in the first match. Punjab Kings will face Royal Challengers Bangalore in the second match of the day on Sunday.

Aryan Khan had to spend several weeks in a Mumbai jail after the Narcotics Control Bureau arrested him in a drug racket case last year. He was arrested from a Goa-bound cruise by an NCB team led by Sameer Wankhede. Shah Rukh’s son was later granted bail by the Bombay High Court. Aryan was later seen holding the fort for the KKR during this year’s IPL auction, which saw the auctioneer collapsing during the LIVE bidding of players. Also joining him was his sister Suhana Khan.