Miss Universe Harnaaz Kaur Sandhu is being hailed for taking a leaf out of Virat Kohli’s book to slam those questioning Muslim girls’ rights to wear hijab in schools and colleges. Going against the wishes of her organiser in a public event, Harnaaz decided to speak her mind on the contentious issue of hijab. As expected, the affable Miss Universe from Punjab is now being widely hailed as a hero on social media. 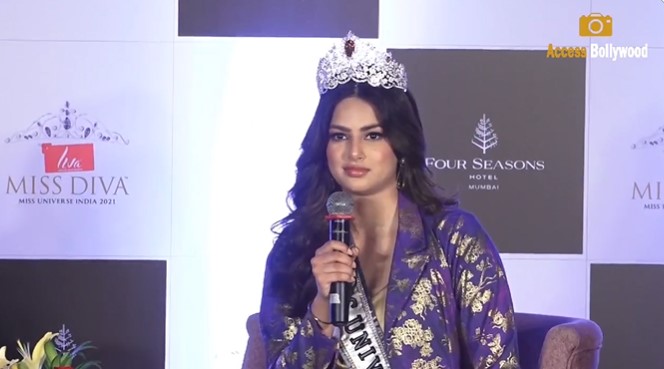 During a public event, a reporter asked Harnaaz, “The issue of hijab has been a topic of discussion in recent days. The court has also issued its verdict. What do you have to say about this?”

Even before Miss Universe Harnaaz Kaur Sandhu could respond to the reporter’s question, one of the organisers intervened asking the reporter to desist from asking the new Miss Universe any political questions. A male voice could be heard saying, “Please avoid asking any political questions. Harnaaz has come to India. It would be better if we celebrate this.”

The organiser’s intervention left the reporter angry as he advised him to leave the choice of answering his question to Harnaaz. The journalist said, “Let Harnaaz say the same things.”

Harnaaz, who was patiently listening to the argument between the reporter and the organiser, broke her silence firmly. She said, “Honestly, why do you guys always target girls?”

She added, “Even now, you are targeting me. Girls are being targeted even on the issue of hijab. Let them (Muslim girls) live the way they choose to. Let them reach their destination. Let them fly. Those are their wings. Don’t clip them. If you must, clip your own.”

Harnaaz’s bold reply on the issue of hijab was reminiscent of how Virat Kohli had snubbed the BCCI media manager last year to break his silence on the trolling of Mohammad Shami after India lost to Pakistan in the T20 World Cup.

Even though the entire team’s performance was below par, Hindutva fanatics had singled out Shami due to his Muslim faith and accused him of receiving money from Pakistan to lose the match. When Kohli was asked to comment on the brutal trolling of his only Muslim teammate, the BCCI media manager had made a desperate to stop him from commenting on the topic. But, Kohli had said, “No, I will elaborate on this a little bit more.”

Reacting to Shami’s trolling, Kohli had said, “There is a good reason why we are playing on the field and not some bunch of spineless people on social media that have no courage to actually speak to any individual in person. This is the lowest level of human form, attacking someone over religion is the most pathetic thing human being can do.”

Also Read: “Most pathetic thing human being can do”: Virat Kohli breaks silence on Islamophobia against Mohammad Shami by Hindutva bigots

He had added, “People take out their frustrations because they have no understanding of the fact that Mohammad Shami has won India n number of matches… If people can overlook that and his passion for the country, honestly I don’t want to waste even one minute of my life on them.

“We stand by him (Shami) fully and we back him 200%. Our brotherhood cannot be shaken.”

Kohli was later sacked as the ODI captain before stepping down as the Test captain as well.

Only Sikh women can understand this.❤
Harnaaz supported Muslim girl and appealed to stop targetting Muslim girls vis-a-vis Hijab. She was like “unko jeene do wo jaise jeena chahti hai”.
Harnaaz Sandhu???? pic.twitter.com/Q698DvSvRq