In a shocking development, Mercedes driver Sir Lewis Hamilton on Saturday was knocked out of the Saudi Arabian Grand Prix as he failed to make the cut for the second round, finishing 16th. His teammate George Russel, who was driving the same car, comfortable made it to the second round of qualifying. However, the Q2 was interrupted by a heavy crash by Mick Schumacher, whose car split in half as a result of the impact of the accident. The development took place within 24 hours of a missile attack on a nearby oil facility in Jeddah. 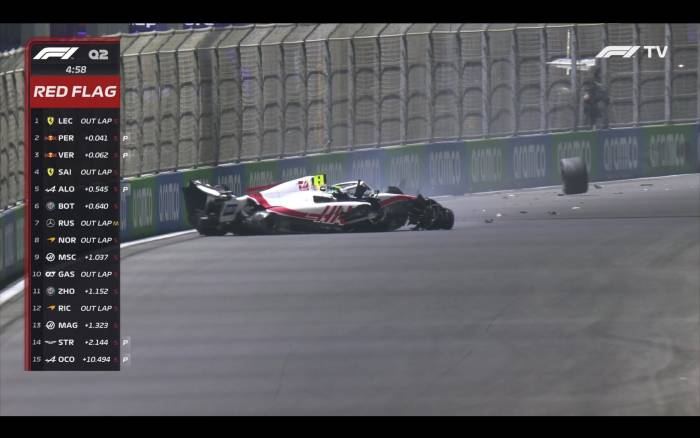 This is the first time Hamilton has found himself knocked out in a Formula 1 qualifying since the Brazilian Grand Prix in 2017 when he met with a heavy crash. The seven-time world champion later told reporters about the problem faced by his car.

“I just struggled with the balance of the car. Not where we want to be. Unfortunately went the wrong way with the set up,” Hamilton said.

Asked if the terror attack targeting a Saudi oil facility in the vicinity of the racing circuit in the last 24 hours may have adversely impacted his chances, the British driver said, “Nope.”

Meanwhile, Mick Schumacher has been taken to a hospital in an air ambulance after his crash. His team, Haas, confirmed that the driver was conscious while being airlifted to a hospital. He’s believed to have spoken to his mother to inform her about his health.

“Mick is physically in a good condition but will be flown by helicopter to hospital for further precautionary check-ups,” Team Haas tweeted.

UPDATE: Mick is physically in a good condition but will be flown by helicopter to hospital for further precautionary check-ups. #HaasF1 #SaudiArabianGP

Saudi Arabian Grand Prix has been marred by a terror attack as Yemen’s Houthi rebels targeted an oil facility in Jeddah with a series of missiles on Friday. The incident left drivers frightened even though decided to go ahead with the race.

Hamilton’s teammate George Russel finished sixth in the final session of the qualifying. He said that ‘as a team it was not a good day’ for the Mercedes. “We don’t have a handle on the car at the moment. It has been a bit inconsistent. We are fighting for this very small window,” Russel said.

He added, “You take your positives but it doesn’t help us in the long run.”

Charles Leclerc of Ferrari, who won the Bahrain Grand Prix, finished second while his teammate Carlos Sainz had to settle with the third position.