Arnab Goswami of Republic TV has been relentless with his obsession with the Nizamuddin  Markaz as the coronavirus pandemic gripped India taking the death toll close to 400. The Republic TV founder has sought to desperately link the spike in the number of positive cases to the Muslim community even though he’s denied allegations of Islamophobia. On Tuesday night, the controversial TV anchor accused one of his guests of threatening him on LIVE TV. This came just days after he lashed out at Priyanka Chopra, blaming her and Isha Ambani’s Holi bash, which was also attended by Shloka Mehta and other Bollywood celebrities, for the spread of the coronavirus in Mumbai and elsewhere. 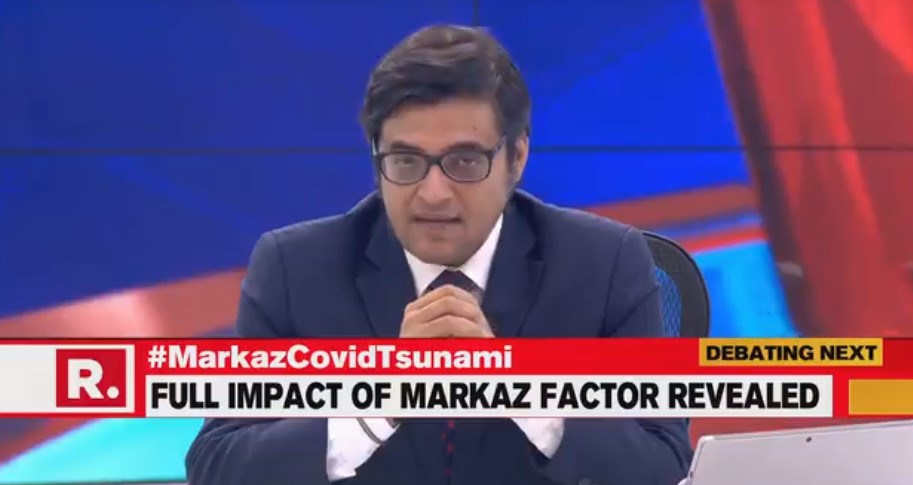 Launching a hashtag #MarkazCovidTsunami, Goswami blamed India’s Islamic religious sect for the deterioration in coronavirus cases. In his opening rant, Goswami said, “The Tablighis have contributed 34% spike in India’s COVID count and the percentage contribution of the Tablighi Jamaat Markaz is going up everywhere. We cannot allow some deliberate violators to pretend to be victims and now create a roadblock in the very critical phase two of the lockdown.”

As his TV debate progressed, Goswami once again relied on fake news to malign the Muslim community.

Goswami made references to the Tablighi Jamaat members allegedly behaving ‘obnoxiously,’ urinating and defecating in quarantine but once again failed to produce any evidence to substantiate his stunning allegations. If anything, the propaganda by Goswami and TV anchors of his ilk has been busted by the UP Police and Arunachal Pradesh government’s publicity wing on several occasions when they publicly humiliated media outlets such as Zee News and ANI for peddling fake news on Tablighi Jamaat members.

Goswami was once again unable to explain why the foreign nationals arriving in India to take part in the Tablighi Jamaat function in Delhi’s Nizamuddin Markaz prior to the start of the national lockdown were not screened at the airport. Had they been screened, they would have been kept in quarantine even before traveling to Nizamuddin, thereby preventing the spread of the virus.

Goswami will not debate this aspect since he knows that this will expose the false claims made by Prime Minister Narendra Modi. Addressing the nation on Tuesday, Modi once again said that India had begun screening passengers arriving in India from foreign destinations even before the country had reported a single positive COVID-19 case. The reality is that no passengers were being scanned at any Indian airports at least until the end of the first week of March even though the country reported its COVID-19 positive case way back in January.

From Priyanka Chopra to Isha Ambani’s Holi bash to now Delhi’s Nizamuddin Markaz,  Goswami has been blaming everyone else for the spread of coronavirus in India. He would do himself and his so-called journalism a great favour by asking a few difficult questions to his political masters, who also happen to run the country at the moment.