Archana Puran Singh is known to be all smiles while being filmed. She is often seen capturing behind-the-scenes moments from the sets of The Kapil Sharma Show for her Instagram page. But, one person had to bear the brunt of her ‘violent’ avatar recently as she resorted to some affectionate aggression after her awkward moment was captured on camera. 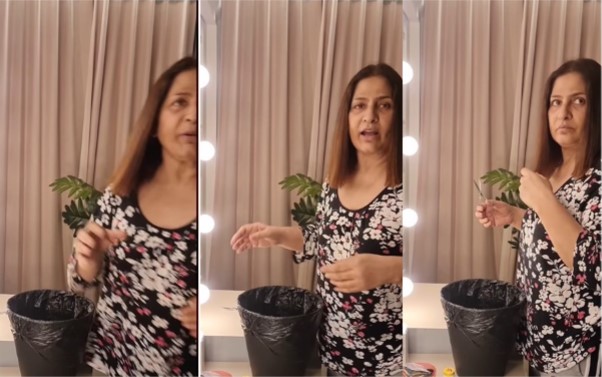 The development took place at Archana’s house where she was seen checking her hair in front of a mirror. It seems like one of her sons, Ayushmaan Sethi, was filming her while the veteran actor was speaking to herself looking into the mirror.

Worried about the prospect of going bald, Archana was seen saying, “I think I have cut enough. I might become bald only.”

Little did she realise that her son was filming her awkward moment. Ayushmaan drew the attention of his Mom by saying, “You left the dustbin on the dressing table.”

Embarrassed by her son’s action, Archana dropped everything as she rushed to slap her son. The sound of the slap could be heard in the background.

Sharing the video, Archana wrote, “Maa ka thappad (Mother’s slap) ❤???? Is there anything more fun than irritating your mom?”

Her video evoked plenty of reactions with one saying, “So true….. My favorite pastime is annoying my mom…..” Another commented, “Whenever I wanna smile, I watch this.” Others appeared to sympathise with Ayushmaan even as they said that the video reminded them about their own childhood.

Archana was recently seen taking a leaf out of Navjot Singh Sidhu’s book to embarrass her co-star Kapil Sharma for the latter’s decision to flirt with Nora Fatehi.

Archana had replaced Sidhu as the show’s judge. The former India cricketer, now busy with the Punjab elections, was famous for his cheesy couplets that he often read to welcome his guests, particularly women.