Archana Puran Singh of The Kapil Sharma Show has often been at the receiving end of demeaning jokes of her co-stars on the Sony TV comedy series. From host Kapil Sharma, to Kiku Sharda to Krushna Abhishek, everyone has taken potshots at Archana using crude jokes. Not many know that these jokes are written by a group of people, called creatives. Archana decided to name and shame them on Wednesday in her latest video, of course in jest. 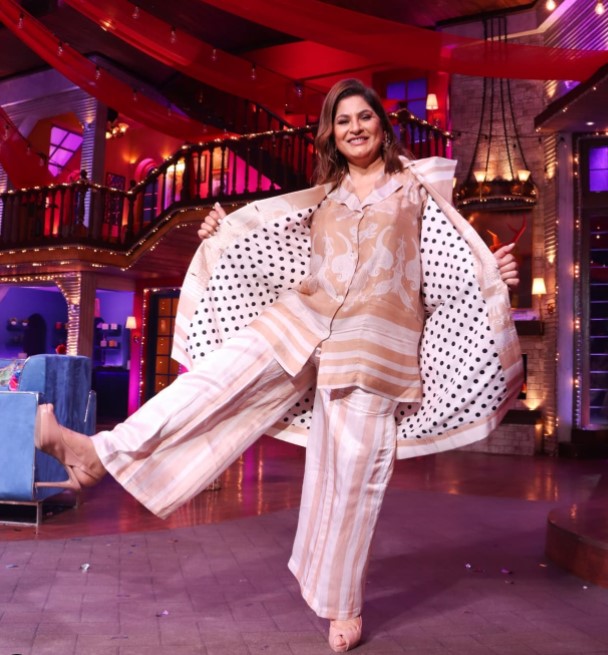 In her latest behind-the-scenes video, Archana could be seen recording her selfie when she suddenly found a group of people in the frame. She said, “They are from our creative team, busy talking amongst themselves.”

Caught off-guard, the members of the creative team praised Archana for her hit Instagram video as they shouted in unison, “Hit hai, hit hai.” Archana replied, “Yes indeed, just like our show.”

Archana explained, “They are from our creative team. They write allthe jokes against me and I end up laughing at those jokes.”

Archana also revealed how the makers of the show had decided to replace members of the audience behind her seat with that cut-outs. “That’s because of the fear of corona,” the veteran actor said in the video.

In 2020, Archana had explained why she never felt offended by crude jokes hurled at her on The Kapil Sharma Show.

Archana was asked by her interviewer in a video interaction, “One beautiful quality of you Archana is that you’ve learnt to laugh at yourself. How do you manage that?”

Archana, who was joined by husband Parmeet Sethi in that interview, had replied, “Honestly speaking. I don’t feel bad (by cruel jokes) because I am confident that the person, who’s saying that to me actually respects me and loves me a lot.”