Archana Puran Singh of The Kapil Sharma Show found herself at the receiving end once again after both Kapil Sharma and Bharti Singh targeted her with cruel jokes. This was days after Archana publicly hatched a plan to steal Sony TV’s mobile phone with the help of Bharti. As if the laughter riot caused by Kapil and Bharti wasn’t enough, Krushna Abhishek dragged Disha Patani to take a dig at Kapil’s guests. 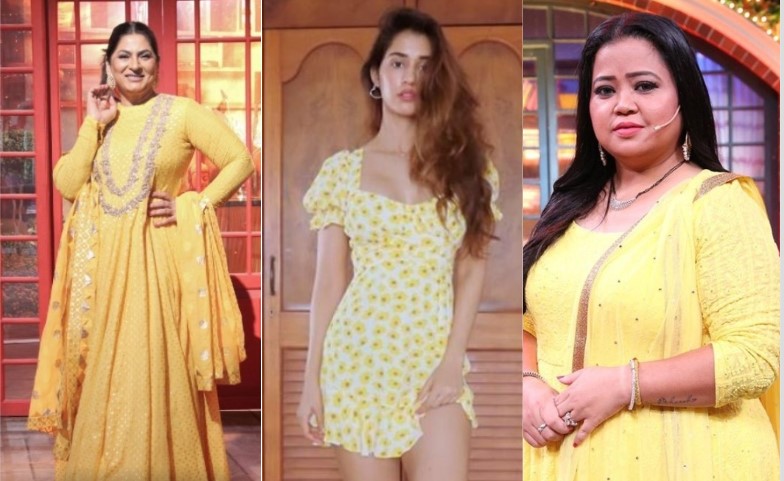 Kapil welcomed two prominent stars, Manoj Tiwari and Ravi Kishan, on his show over the weekend. Ravi reminded Archana how she was once the heroine of his film, where ‘we had danced with plenty of enthusiasm.’

This prompted Kapil to wonder if Manoj Tiwari and Ravi Kishan had chosen to appear on The Kapil Sharma Show together because of Archana’s presence on the show.

When Krushna made his appearance on the show, he began to utter gibberish in a bid to speak Bhojpuri. He said, “Gor para tani (I touch your feet), Disha Patani, Ramesh Torani.” This cracked everyone on the sets including Manoj Tiwari and Ravi Kishan, who themselves are popular Bhojpuri stars.

Then came Bharti, who decided to target Archana from the word go. Just when she was trying to crack jokes at the expense of Manoj Tiwari by requesting him to include her in his cricket team, Kapil asked, “Do you know how to play cricket?”

Bharti replied, “As if she (Archana) knows cricket, but she still managed to get Navjot Singh Sidhu out.” This was in reference to Archana replacing Sidhu, a former India cricketer, as the judge of The Kapil Sharma Show.

Bharti also said that Archana’s job was the easiest since she earned her livelihood by simply laughing.

One viewer praised Archana for efficiently managing her household chores and shooting commitment of The Kapil Sharma Show. To which, Kapil said, “She also managed Sidhu ji very well.”

The caller, identified as Rajesh, said that his wife’s name too was Archana. He decided to sing the popular song Kabhi Kabhi for the veteran actress. This prompted Kapil to comment, “Rajesh ji, I have learned one lesson of life from you. Let’s get married early so that when children are grown up, we can sing for other people’s wives.”

Last week,  Archana Puran Singh of The Kapil Sharma Show was placed in a quandary after her co-star Bharti Singh asked for mobile phone on Instagram. In response, the veteran actress had come up with a clever idea as she suggested to Bharti to steal the mobile phone that Archana is given on The Kapil Sharma Show every weekend to click the guests’ photo with host Kapil Sharma. Bharti had reacted to a video of Archana gifting two mobile phones to her domestic help namely Bhagyashree and Raj.