Archana Puran Singh of The Kapil Sharma Show has become the first mainstream Bollywood actor to extend her support to protesting farmers by sharing an extraordinary black image on her Instagram page in solidarity. Her support came hours before the planned nationwide strike called by farmers against the three Farm Laws by the central government. This also came a day after actor Diljit Dosanjh slammed Kangana Ranaut for defaming two elderly women, Bilkis Dadi of Shaheen Bagh and Mahinder Kaur of Punjab, by accusing them of accepting Rs. 100 to take part in protests. 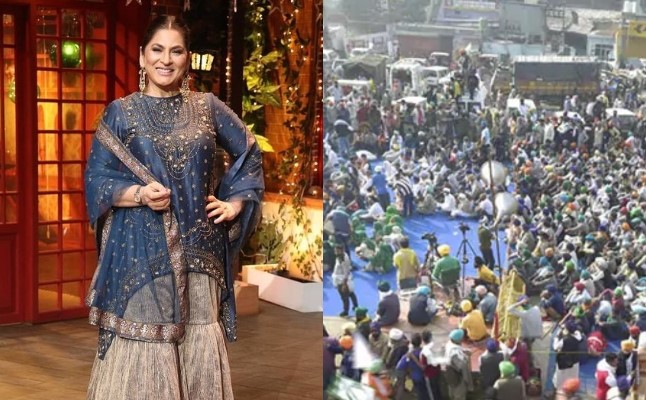 Sharing a black image, Archana wrote, “#kisaan.” The popular actor earned plenty of plaudits from her fans for her bold stand in support of protesting farmers. One wrote, “I think this blank picture say everything ma’am .Thanku ma’am for supporting farmers.” “Thanku mam 4 supportong farmers,” wrote another fan. Another commented, “This picture actually describes the future of farmers in our country..”

Archana thanked many of her fans for their appreciation of her stand in support of the protesting farmers.

This came on a day Bhojpuri star Khesari Lal Yadav slammed Kangana for her defamatory tweet against protesting farmers. He had tweeted, “Brothers, this Kangana doesn’t know anything, doesn’t know the difference between mango or radish. But she tends to blabber about everything. Farmers need all of our support today. We all should shout Jai Jawan Jai Kisan. To everyone else, please accept Khesari’s salutations.”

Meanwhile, Diljit has reportedly donated a whopping Rs. 1 crore to buy winter gear for the protesting farmers. The popular actor from Punjab, who joined the farmers at the Delhi-Haryana border, has not made any noise about his extraordinary donation.

As for Archana, she was in seen conversation with Nawazuddin Siddiqui, who graced the Salman Khan-produced show hosted by Kapil Sharma on Saturday. Kapil and Bharti Singh have not taken a public stand on the farmers even though they hail from Punjab. As for Archana, she comes from Dehradun in Uttarakhand.