Indian Idol judge Neha Kakkar was left blushing after a contestant’s mother desperately urged her to consider casting her son as her hero in her upcoming film. Neha’s fellow judge Himesh Reshammiya compounded her embarrassment by asking the contestant to woo the former by treating her as Kajol of Dilwale Dulhaniya Le Jayenge with a reference to Parmeet Sethi, husband of Archana Puran Singh of The Kapil Sharma Show. While doing so, Himesh also made a veiled dig at Aditya Narayan for his inability to marry Neha, who exchanged wedding vows with Rohanpreet Singh, a suitor of former Bigg Boss housemate, Shehnaaz Gill aka Punjab’s Katrina Kaif. Weeks later, Aditya too tied the knot with his childhood sweetheart, Shweta Agarwal. 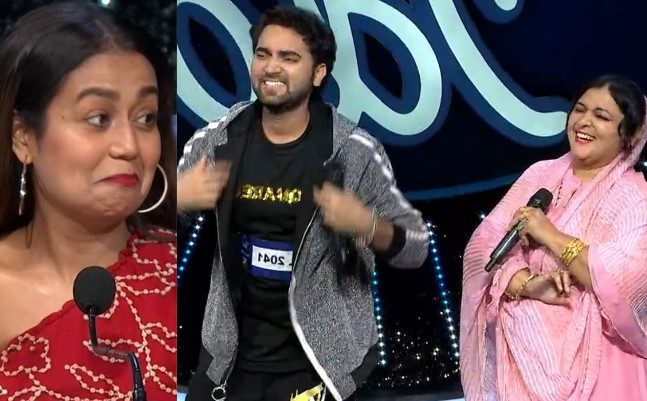 “I am a big fan of Neha ma’am,” she said adding that “I’ve heard that you are also making a film?” When Neha answered in affirmative, the contestant’s mother asked, “And you are also looking for a hero?”

Neha once again said that she was indeed looking for a lead male protagonist for her film. The contestant’s mother asked, “What’s the need to search for a hero when you have my son standing right in front of you. Is he not handsome and good looking?”

Neha’s fellow judge, Vishal Dadlani, said, “Danish 9the contestant) has given his audition to showcase his singing skills. Now we need him to audition for his acting.”

Neha asked the contestant, “Would you fancy giving an audition?” He replied,” Of course ma’am. I will deliver some dialogues from Shah Rukh Khan’s films.”

Another Indian Idol judge Himesh Reshammiya said, “You can consider Nehu your Kajol (from Dilwale Dulhaniya Le Jayenge),. Adi (Aditya Narayan) has already become Parmeet Sethi.” This was a veiled dig at the Indian Idol host for his inability to woo Neha Kakkar, who was rumoured to marry Neha during the last edition of the singing reality show.

The character played by Archana Puran Singh’s husband in the DDLJ was destined to marry Kajol, but she ends up marrying Shah Rukh in the end, leaving Parmeet Sethi disappointed.

Danish delivered several lines from various hit films of Shah Rukh, leaving everyone impressed. Even Neha said, “Yaar Danish. You turned out to be a star.”

Neha recently tied the knot with Rohanpreet Singh, himself a former singing reality show contestant. Rohanpreet had also taken part in another reality show as a suitor of ex-Bigg Boss contestant, Shehnaaz Gill aka Punjab’s Katrina Kaif. Soon after their wedding, both Neha and Rohanpreet had flown to Dubai on a honeymoon.