Comedian-actor Kapil Sharma has thanked Anupam Kher for clarifying allegations of refusing to promote Kashmir Files on The Kapil Sharma Show. Sharing a video clip of Kher’s conversation with Times Now’s Navika Kumar, Kapil thanked the veteran actor for publicly admitting that the Sony TV show had invited him to promote the film. 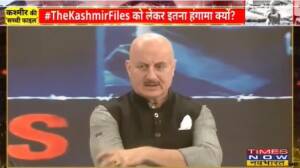 Anupam Kher had told Navika Kumar, “To be very honest, I must say it here. I was called to be on the show. But I told my manager that this film is very serious I can’t go (on The Kapil Sharma Show). So I want to put my point over here.”

Kher said that he had appeared on Kapil’s comedy show adding that the comedian does a good job as the host.

Kher, however, wasted no time in replying to Kapil’s tweet as he accused the comedian of not showing the full truth. He wrote, “Dear @KapilSharmaK9! I wish you had posted the full video and not the half truth. The entire world is celebrating, you also celebrate tonight. Love and prayers always!”

Kashmir Files producer Vivek Agnihotri had triggered controversy by claiming that Kapil had refused to invite him on his comedy show by saying that the film did not have big star cast. This had prompted the right-wing supporters to call for the boycott of The Kapil Sharma Show.

Breaking his silence, Kapil had said, “This is not the truth. I replied because you asked. Rest, there is no point in giving an explanation to those, who have already accepted this as a truth. Just a suggestion as a experienced social media user:- never believe in one sided story in today’s social media world. dhanyawaad. (sic).”