Rajasthan Chief Minister Ashok Gehlot on Monday lashed out at former Union Minister Kapil Sibal for his recent criticism against the Gandhi family. Gehlot was reacting to Sibal’s recent newspaper interview in which the senior Supreme Court lawyer had blamed the Gandhi family for the humiliating defeat in the just-concluded assembly polls. 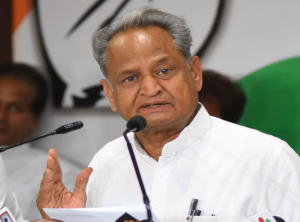 “Kapil Sibal isn’t a person from Congress culture. He’s a renowned advocate who entered Congress. Sonia Ji&Rahul Ji has given him a lot of chances. It’s not expected from a person who doesn’t know ABC of Congress to give such statements,” Gehlot was quoted as saying by ANI.

According to reports, Congress President Sonia Gandhi had offered to resign from her post along with son Rahul Gandhi and daughter Priyanka Gandhi during the Congress Working Committee meeting, held to asses the election defeats in five states. However, senior party leaders had opposed the move.

Reacting to the CWC development, Sibal had said, “The people in the CWC, the prominent leaders of our party in the CWC barring a few exceptions, feel maybe genuinely, that without the Gandhi family, it’s not possible for the Congress to survive. That’s a possible point of view. It’s not a point of view that many of us share.”

The Congress suffered humiliating defeats in Punjab, Uttar Pradesh, Uttarakhand, Manipur and Goa. According to analysts, the defeat in Punjab was particularly shocking for the Congress since it won a huge majority in the state in 2017 and was poised to win a second consecutive term. However, just before the elections, the party had to face a series of revolts in the state unit prompting the then Chief Minister Captain Amarinder Singh to resign from his.