Sudhir Chaudhary of Zee News isn’t alone in facing the widespread ridicule for his glaring hypocrisy over the controversial sedition law. Not surprisingly, joining the new hall of shame is Republic TV founder Arnab Goswami. 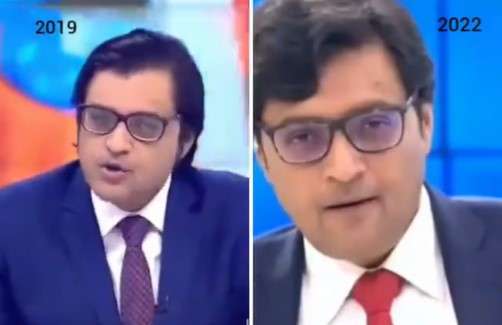 Just like Sudhir Chaudhary, Goswami too had lashed out at the Congress in 2019 for vowing to do away with the British-era sedition law after being voted to power. Reacting to the Congress manifesto for the 2019 parliamentary polls, Goswami had said, “Today, you truly have been given the Rahul Gandhi vision before us. And what’s his vision? His vision is to give state support to the tukde tukde gang.”

He had gone on to conclude, “According to the Congress manifesto, army presence in Kashmir will be reduced and there will be no sedition law anymore, which means everybody is free to abuse India.”

That was in 2019 when the opposition Congress proposed to do away with the draconian sedition law.

However, Goswami has performed a spectacular turnaround three years later when the Narendra Modi government made a similar suggestion in an affidavit in the Supreme Court. Goswami took to TV to hail the Modi government’s affidavit, while his colleague declared it as a ‘masterstroke.’

His Republic TV colleague replied, “Arnab, I think you have hit the nail on the head. I think it’s a masterstroke coming in from the government.”

Earlier, Congress leaders had slammed Zee News anchor Sudhir Chaudhary for his own hypocrisy on the sedition law.

A Supreme Court Bench comprising Chief Justice of India NV Ramana and Justices Surya Kant and Hima Kohli had earlier directed the government to keep Section 124A in abeyance till the review of the law is complete by the central government. The court, according to the Bar and Bench website, also asked governments to not continue with investigation or take coercive steps in all pending cases of sedition till the government’s exercise is complete.