An Aaj Tak anchor is facing a barrage of attacks from medical professionals and other netizens after she was seen harassing and humiliating a doctor treating desperate children suffering from Acute Encephalitis Syndrome at a hospital in Muzaffarpur. The video of Anjana Om Kashyap, who is an Executive Editor of the Hindi news channel Aaj Tak, broadcasting live from inside the ICU of a hospital in Muzaffarpur while admonishing a doctor seemingly for no fault of his has gone virals. 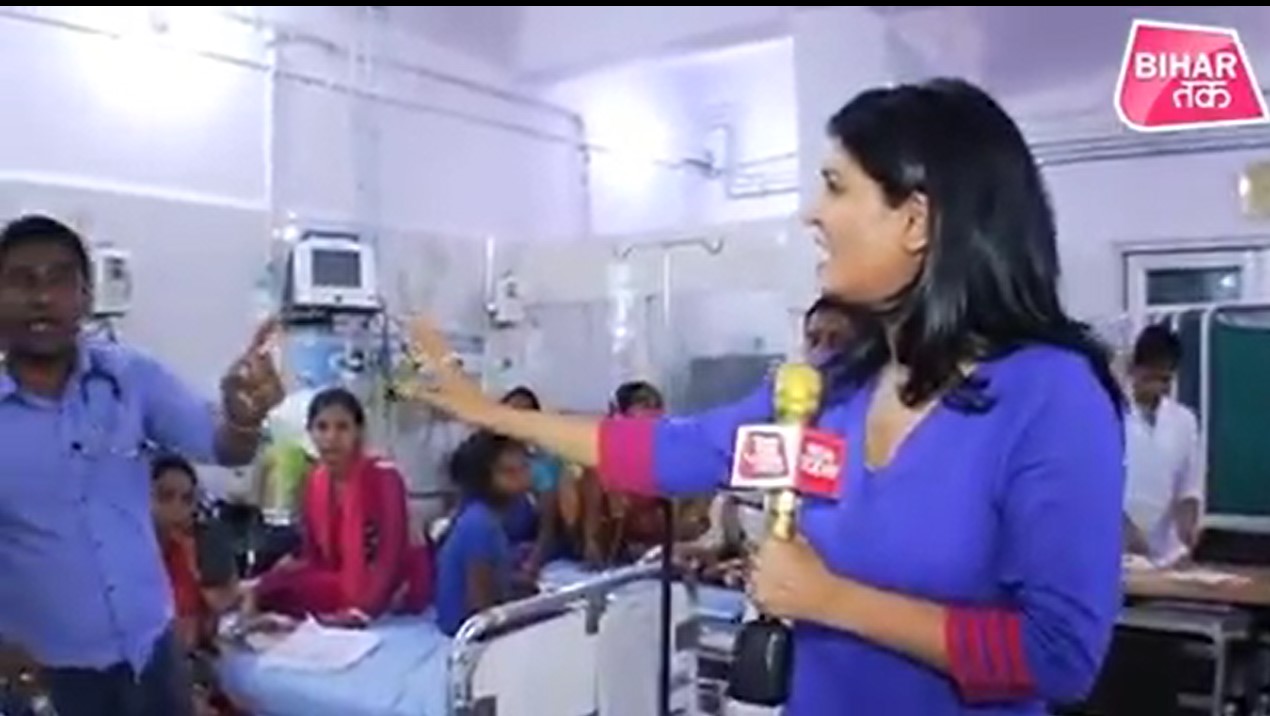 In the video, Kashyap is seen charging at a doctor, who looks flustered even as he attends a patient having been brought to the ICU. The number of children present in the ICU appears to far exceed the number of beds available.

Starting her broadcast from inside the ICU, Kashyap asks a relative of a child before asking a nurse and a doctor on the round where they intended to ‘adjust’ the child in question. The doctor, who is seen attending a patient is forced to have a conversation with Kashyap on camera. And when he attempts to proceed to attend patients, in desperate need for treatment, the Aaj Tak anchor stops him by admonishing.

“One second, one second. Children are coming here, there is no one to instruct them. If you don’t have space here, then you could have shifted them to a different ward.”

The doctor in the video once again turns towards a patient being carried on a stretcher, but an angry Kashyap once again stops him by angrily asking, “Doctor Sahab, where are you going?.. Had I not switched on my mic, you wouldn’t have looked at the patient for one hour.”

The doctor replies taking objection to Kashyap’s allegations. He asks angrily, “What are you talking about? I am taking the round. Am I sitting here? The sister (nurse) was attending to the new patient. Wasn’t she?”

Kashyap here tells the doctor that she is not blaming him for the chaos but raising questions on the flawed system. But soon, she once again turns aggressive and accuses him of saying something that the doctor claims to have never said. From the video shared by Aaj Tak, it did not appear that the doctor said what Kashyap alleged, i.e. ‘I will attend to the child in some time’.

Kashyap then shifts her focus to another nurse, who reminds her that one of her fellow nurses was attending to the child when the Aaj Tak anchor lost her temper. But, Kashyap appeared in no mood to stand corrected.

She returns to the doctor one more time to almost pull out a filmy dialogue; as she says, “Camera aur mic ki roshni mein ilaj nahi hota na doctor sahab.” This implied that the doctor was only pretending to treat the patients because of the presence of the Aaj Tak crew.

The doctor was not going to accept this insinuation lying down as he protested. “There’s a difference between standing idle and treating the patient,” he said. But Kashyap pulls the mic away from him while declaring sarcastically, “Yes I saw that you wanted to be seen as treating a patient on camera.”

Kashyap was seen raising her voice in anger when the doctor took objection to her allegations.

No sooner did Aaj Tak share this video from its social media pages as a sign of its great journalism, Kashyap began to face widespread condemnation. While sharing the video, Aaj Tak’s caption read, “When a journalist took on the doctor for the treatment of children.”

Here’s how people have been reacting on social media: (You can watch the video at the end of this report). Many users also asked if she was so concerned about Muzaffarpur’s children, then why she had arrived here to cover the catastrophic human tragedy on the 17th day when the disease had claimed the lives of more than 100 people.

Journalist Abhisar Sharma wrote on Facebook, “I’m stunned by the display of this journalism. Such a shameful scene inside the ICU.” Author Kanchan Pant wrote in Hindi, “You should be ashamed of yourself Aanjana Om Kashyap. Show a cricket match if you want TRP. Or broadcast the true or false stories on the relationship of film stars. But stop these theatrics.” 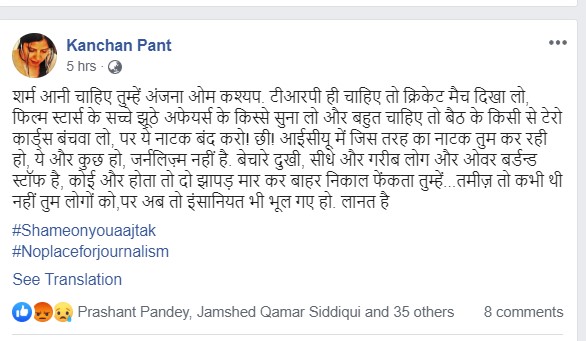 How insensitive??? Questions with which CM, PM, concerned ministers, area MP n MLAs need to be grilled with, .@anjanaomkashyap is grilling the doctors. And how insensitive n inhuman is to waste time of a doctor who is trying to treat such patients with whatever resources he has?? https://t.co/WpaAaYbJzT

This shameless @anjanaomkashyap lady blaming to all the doctors for poor conditions of hospital.
.

You all can see how all Doctors doing best to help kids but for fake sympathy and propaganda to save government she crossed all limit of Shamelessness. pic.twitter.com/wUuwXgm1dS

this is @aajtak @anjanaomkashyap reporting.
This is the kind of media promoted voilence against doctors.
Is providing the infrastructure also now doctor responsibility? Look at the doctor patient ratio?
What can 1 doctor do with 100 patients admitted@IMAIndiaOrg @NitishKumar pic.twitter.com/ROrwof9REJ

Congratulations for harrassment of staff and obstructing treatment of a already failed system. Pls talk in this tone to the CM instead of shouting on a helpless doctor pic.twitter.com/KcTemtBR2F

More than 100 children have died in the last 17 days due to encephalitis. Indian media particularly TV channels were accused of turning a blind eye to this unfolding human tragedy because of their focus on other ‘pressing issues’ such as the doctors strike in West Bengal and the ongoing cricket World Cup.