Janta Ka Reporter 2.0
Home Business “Blacklisted 3 channels for being source of toxicity in our society”: Industrialist...

Industrialist Rajiv Bajaj on Thursday made a stunning revelation informing how his company, Bajaj Limited, had blacklisted three TV channels for spreading toxicity in the society. His revelation came in the aftermath of Mumbai Police Commissioner Param Bir Singh’s extraordinary press conference on the alleged involvement of Arnab Goswami’s Republic TV in the TRP scam. The Mumbai top cop had hinted that Goswami too could face the arrest and Republic TV’s bank accounts may be seized in time to come. 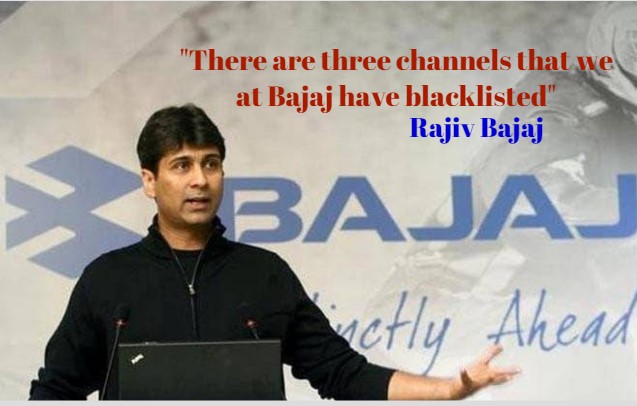 Reacting to the development, Rajiv Bajaj told a business TV channel, “A strong brand, we all are in the business of building brand, a strong brand is the foundation on which you build a strong business. And at the end of the day as everybody would agree, the purpose of a strong solid business is to contribute not only to the business itself but to the society at large.”

Bajaj continued as he took part in a debate programme on CNBC-TV18 news channel to discuss the fallout of the press conference by Singh on the TRP scam, “So at Bajaj, for example, we are very clear that our brand would never be associated with anything that we feel is, beyond reasonable doubt, a source of toxicity in our society.

“There are three channels that we at Bajaj have blacklisted for some time now and I was happily surprised some time ago when I called up my head of marketing, my colleague said to me that ‘I’ve done this nine months ago’. So that was very motivating for me.”

‘Our brand would never be associated with anything that we feel is, beyond reasonable doubt, a source of toxicity in our society’ says Managing Director of @bajaj_ltd Rajiv Bajaj in a conversation with @ShereenBhan. #FakeTRP #FakeTRPScam pic.twitter.com/A3gESXUFI4

Thursday’s extraordinary press conference by Param Bir Singh caused tremors in the Indian media, evoking an angry reaction from Goswami, who threatened to file a defamation case against the Mumbai top cop.

Singh had told reporters on Thursday, “As I said, owners of two channels, Fakt Marathi and Box Cinema, have been arrested. Now our investigation shows that there are chances of people working at Republic TV, the channel’s directors and promoters involved (in the TRP racket). The future investigation is being carried out against Republic TV employees, directors and its directors.”