A Sunday afternoon is not the ideal time to be out and about particularly when you have the option to enjoy the comfort of your house in a freezing cold Delhi. This Sunday when Delhi recorded the coldest winter for 118 years, something made me leave my house right after the lunch to join thousands of protesters in the Jamia area of the country’s national capital. I had been planning to visit the protestors for quite some time. The last Sunday of the year of the decade seemed like the perfect time to do it. 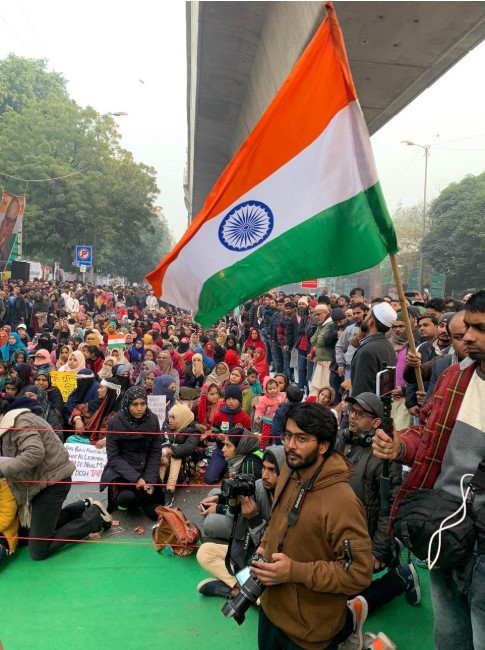 I parked my car near the Escorts hospital and walked down to gate number 7 of the Jamia Millia Islamia University. I saw a sea of protesters gather on one side of the road. Among those protesting were also women and children who sat on thin rugs. With the Indian tricolour in their hands, they looked visibly concerned about their future. While many were seen waving national flags, others placed them on their laps like mothers nestling their infants.

One side of the gathering had been demarcated as a makeshift ‘stage.’ Student leaders and other members of the civil society came in turns and put across their views on the danger of the amended Citizenship Act and its disastrous consequences when the NRC is rolled out across India.

I too was asked to speak and I did. At a distance, there were some students singing patriotic songs. Amidst loud chants of Hindustan Hamara hai, the crowd waved huge Indian flags in all directions. It didn’t take long for some of those students to come towards the ‘stage’ to brandish the tiranga as their ultimate weapon, their strongest ally and loudest slogan. The scene reminded me of those claims being made on social media that the protesting students were pro-Pakistan and why they should be sent to ‘where they belong.’ 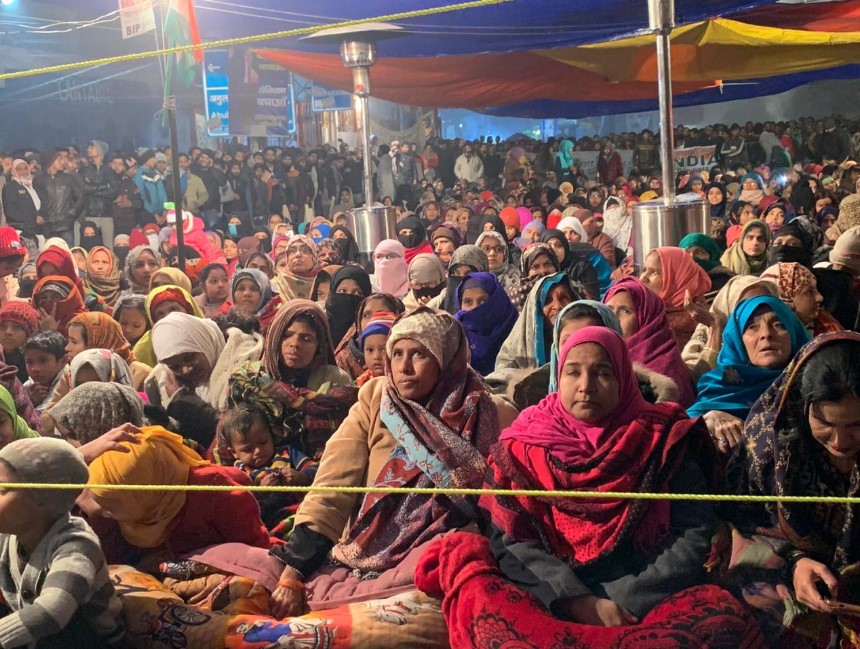 I wish these social media footsoldiers of a particular party visited Jamia and saw the sheer number of Indian flags being waved at the protest site. It made me wonder how any Indian could feel distressed despite being under the shade of there flapping tricolours. I could detect the anxiety and sense of trepidation about their future palpable among the protesters.

The protesters knew that their struggle was their victory, their unity their strength and their silence serving as their voice. As I made my way towards Shaheen Bagh, the neighbourhood adjacent to Jamia, I saw innumerable small and large hand-written posters and wall graffiti reminding us of the secular essence of India. One of them had a photo of a hand sticking up from behind a crowd carrying a very small unassuming poster that read, ‘Hum Kaghaz nahi dikayenge! (We will not show the documents)‘ It gave me goosebumps then and I get goosebumps now as I write about this.

My walk up to Shaheen Bagh was quiet and chilly. There were lots of people on the streets as if some quiet celebration was underway. When I reached the Shaheen Bagh protest venue, I was taken aback by the sheer magnitude of it. They told me that it was not the largest gathering yet. It was only 6 in the evening and I stayed there till 9. The women and children seated on the road had covered themselves up in the best possible way to protect themselves from the freezing cold temperature. They had their blankets and quilts covering the children and the elderly with a large group of men guarding the ladies enclosure. 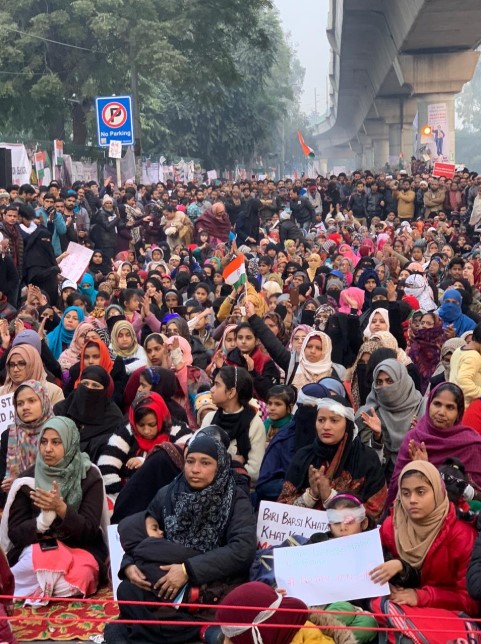 From the stage, I was drawn to the eyes of the women protesters. They were weary but not sleepy. They reacted to each word being spoken from the stage. They were aware of the devastation that the CAA and the NRC will bring to India. The speakers kept underlining the fact that theirs was not a Hindu or Muslim struggle. They kept saying that their protest was to protect the constitution of India, the document most sacred to them as Indians.

I felt like I had come to a utopic land where people knew exactly what mattered to them the most. Young boys and girls on the stage were showing incredible patience and understanding towards each other and the crowds. Good samaritans distributed water and juice packets to protesters. I felt incredibly privileged about being given a bottle of water.

People were taking turns to speak. One of the most profound moments for me was to see a young man read out his poem predicting the time when he will be flipping through the pages of the constitution while sitting inside a detention camp. My eyes welled up. I had seen everything. I felt very safe looking at them. I felt that the country’s youth had shown immense promise and that the struggle was moving in the right direction.

It also brought home the point that the cops and other government agencies trying to intimidate the protesters had no idea about the strength of our secular bonding.  They have no idea how unbreakable the spirit of India is. They also have no idea how small their violence is in the face of these eyes burning silently like embers of hope.

On my way back, I sat in a rickshaw and came to the spot where my car was parked. The rickshaw driver, a local guy said, “Hum toh dekh rahe hain itne dino se! Bahut himmat hai in sab mein!” There was a genuine appreciation and respect in his voice. He refused to accept money from me saying that he often ferried protesters for free to contribute his bit towards the ongoing struggle. I insisted on paying him and he accepted with some reluctance.

It was 9.30 at night and the Delhi sky had never looked brighter. To the naysayers, I’d request just one thing: visit the protests. Just once. There is so much to learn and unlearn. Let the New Year be truly new! Watch India shine in the eyes of these men and women who we have the honour of calling our countrymen.