World Cup winning US women’s football team co-captain Megan Rapinoe has said that she was not going to visit the ‘fu*king’ White House even if she was invited by President Donald Trump. This was before her team beat the Netherlands to lift the coveted trophy for the fourth time in history. And if this was not embarrassing enough for the US President, a LIVE broadcast of pro-government Fox News from France was interrupted by ‘F*ck Trump’ chants. 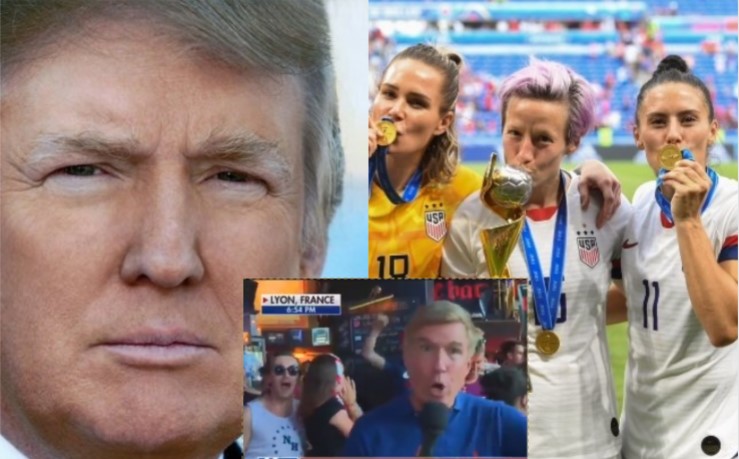 Rapinoe had stirred a huge controversy even before the final by saying, “I’m not going to the fucking White House.”

This evoked an angry response from Trump, who took to Twitter to write, “Women’s soccer player, @mPinoe, just stated that she is “not going to the F…ing White House if we win.” Other than the NBA, which now refuses to call owners, owners (please explain that I just got Criminal Justice Reform passed, Black unemployment is at the lowest level in our Country’s history, and the poverty index is also best number EVER), leagues and teams love coming to the White House. I am a big fan of the American Team, and Women’s Soccer, but Megan should WIN first before she TALKS! Finish the job!”

Women’s soccer player, @mPinoe, just stated that she is “not going to the F…ing White House if we win.” Other than the NBA, which now refuses to call owners, owners (please explain that I just got Criminal Justice Reform passed, Black unemployment is at the lowest level…

Trump had said that he planned to invite the team to the White House regardless of their performance in the World Cup final. But Megan said that not many in the team will accept his offer. She told AFP, “I haven’t spoken to everyone about it, obviously not myself, not Ali Krieger, and I suspect not many, if any, of the other players (would attend the visit).”

Meanwhile, a video of pro-Trump TV channel Fox News’ LIVE broadcast being interrupted by ‘F*ck Trump’ chants has gone viral on social media. In the video, a Fox News reporter could be seen reporting from inside a sports bar in France soon after the team won the World Cup. However, to his utter shock, US fans in the background were seen chanting ‘F*ck Trump’ slogans.

When the Fox News reporter tried to speak to US fans for their reaction on the team’s win, one said, “Now we need to win 2020 (US Presidential elections). Democrats, get that racist out of the White House.” The video has been viewed more than 8 million times since being posted on Twitter on Sunday.