India on Thursday beat West Indies by six wickets by scoring more than 7 runs an over to lift the ODI series 2-0 against the hosts. Skipper Virat Kohli scored his 43rd ODI century as he anchored the Indian innings to guide his side to a memorable win. Virat Kohli remained unbeaten at 114 runs. 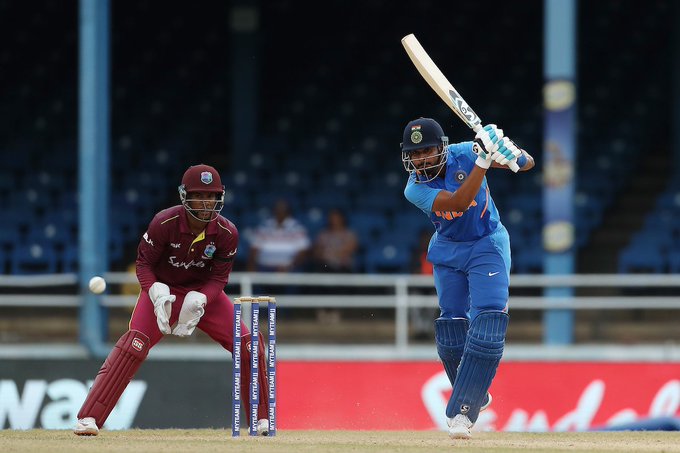 India was given a target of 255 runs in 35 overs under the Duckworth Lewis system after the rain impacted the match. The Indian captain was supported by Shreyas Iyer, who made 65 runs in just 41 balls.

Batting first, West Indies piled up a total of 240 for 7 in 40 overs in a rain-affected match. Their opening batsmen Chris Gayle and Evin Lewis looked in devastating form as the two added 115 runs for the first week in 10.5 overs. Gayle, who was perhaps playing his last match of the career, went on to score 72 runs in 41 balls. Gayle had completed his fifty in just 30 balls.

Barring Yuzvendra Chahal and Kedar Jadhav, every other Indian bowler went for plenty of runs. Even though Khaleel Ahmed picked up three wickets, the highest by an Indian bowler, he conceded 68 runs in seven overs.

Virat Kohli was declared both Player Of The Series and Player Of the Match. Commentator Harsha Bhogle wrote, “No 43. Counter ticks over. It’s the Kohli production line. It’s smooth and it’s efficient. And it’s delightfully predictable.”

Speaking after the match, Kohli siad, “Last couple of games presented a challenge for me but Shreyas’ knock was game-changer today. He has suddenly presented a role for himself, coming in and playing according to the situation. At no stage he looked like getting out.I don’t think it’s a fracture otherwise I wouldn’t have continued. It’s a just split of the nail. We were a bit nervous, thinking they can take advantage as the outfield will be wet. But our bowlers did well. Looking forward to the Test series.”

Fabian Allen was the pick of the bowler for West Indies as he picked up two wickets.

The visitors have already defeated West Indies 3-0 in the T20 series. India and West Indies will also lock horns in two Test matches with the first Test starting on 22 August.