England faced yet another batting collapse on the second day’s play in the second Ashes Test at the Lord’s as the hosts were bundled out for 258. Australia were 30-1 at the stumps with three day’s of the game in hand. 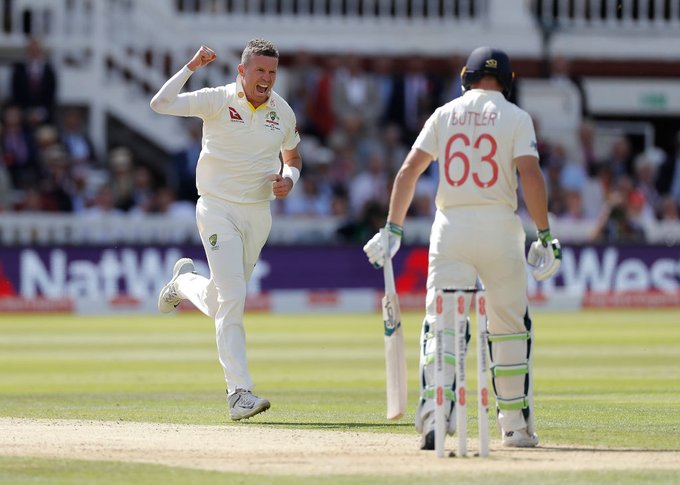 After the first day’s play was washed out due to poor weather, England started their first innings on Thursday. However, they lost their star opening batsman Jason Roy cheaply when the team’s total was just 1. Roy departed without bothering the scorers.

The wickets kept falling at regular intervals and barring Rory Burns and Jonny Bairstow, no other English batsmen were able to put up any fight against the Aussies. Both Burns and Bairstow scored 53 and 52 runs respectively.

Pat Cummins and Josh Hazlewood were the most successful bowlers for Australia as they both finished the day with three wickets each.

Australia too did not start well as they lost David Warned early in their innings to a devastating inswinger from Stuart Broad. Jofra Archer, who’s replaced Jimmy Anderson in the second Test, too posed plenty of challenges to the Aussie batsmen. At the close of the second day’s play, Aussies were 30-1 with Usman Khawaja unbeaten on 18 while Cameron Bancroft giving him company at 5 not out.

Former England skipper Alec Stuart said, “It has not been a good day for England. It has been another sloppy batting performance. It could have been worse but they have got to bat with more discipline.”

The good news for England is that the weather forecast for Friday when rains are likely to play a spoilsport once again.