What began as an innocuous Twitter spat appears to have turned into a full-blown war between former England captain Michael Vaughan and former Indian cricketer Sanjay Manjrekar. Both are currently on commentary duty for the Cricket World Cup in England. 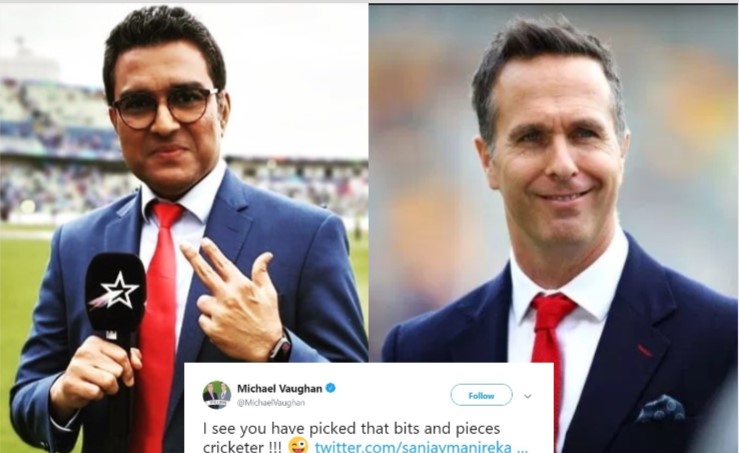 Vaughan has taken to Twitter to inform his followers that Manjrekar had blocked him on the microblogging site. He wrote, “BREAKING NEWS .. I have been blocked by Sanjay Manjrekar.”

He later took to Instagram to sarcastically claim that his life was now sorted. He wrote, “My life is now sorted !!!! ”

The news evoked plenty of reactions from Indian cricket fans many of whom appeared to be extending their support to Vaughan. One wrote, “If only viewers could have some technique to mute Manjrekar!” Another commented, “Good for u, mate… just think abt us 1.3 billion people. He can’t block us all n we all can’t block him.” “At least you will be one of the lucky ones to avoid his childish commentary and constant gaffes,” wrote another Twitter user.

Manjrekar had found himself embroiled in a Twitter spat with Vaughan due to his earlier comments calling Ravindra Jadeja a ‘bits and pieces’ player. This was after Manjrekar took to Twitter to predict the Indian playing XI against New Zealand in the World Cup semi-final, scheduled to be played on Tuesday in Manchester.

Seeing Jadeja in the list, Vaughan could not help himself from taking a jibe at Manjrekar by enquiring how his list had also included a player, who he had referred to as a ‘bits and pieces player.’ Vaughan asked, “I see you have picked that bits and pieces cricketer !!!”

When Manjrekar clarified that his list was only his prediction and not his choice, Vaughan had asked cheekily, “What’s your team then my dear Sanjay !! Are you picking any bits & pieces cricketers ?”

As expected, Manjrekar has decided to not engage with Vaughan in any further conversation.

One of the reasons why Manjrekar may have decided to block Vaughan is because the latter had continued to take a potshot at the former India cricketer even on Tuesday by routinely referring to his ‘bits and pieces’ remarks. In one tweet, Vaughan had written about Jadeja’s bowling, “Bloody hell Bits & Piece can Spin it ….”

Jadeja was very impressive with his bowling by conceding just 34 runs and taking an important wicket of Henry Nicholls in his quota of 10 overs during India’s semi-final match against New Zealand at the Old Trafford on Tuesday.