Former India cricketer Sanjay Manjrekar on Wednesday finally congratulated Ravindra Jadeja for his valiant innings of 77 runs that almost won India a place in the World Cup final. However, his words of appreciation for Jadeja, who he had called a ‘bits and pieces’ player, came with a wink. This opened a floodgate of nasty trolling on Twitter, where his critics called him an anti-national among other things. 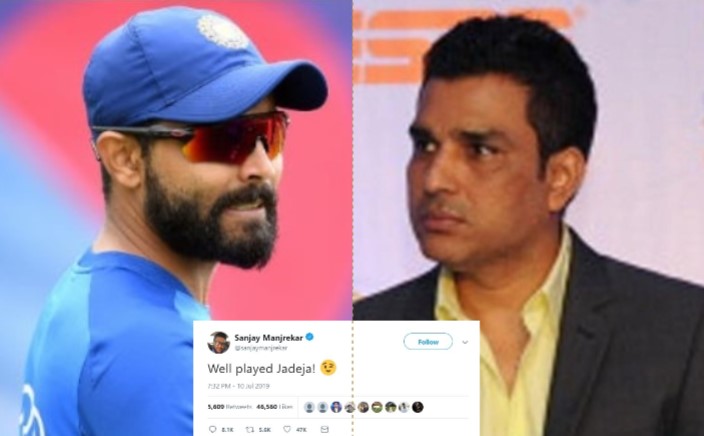 His tweet received more than 5,000 shares and nearly 50,000 likes. Thousands of users on the microblogging site also reacted to his tweet. User Moksha wrote, “Yes – just the way you played it dirty by being anti – India throughout – that wink is disgusting!! This bits-n-pieces commentator needs to be thrown out!!” User LagbhagSecular commented, “How low sanjay manjrekar you will fall? Look likes your celebrating India’s defeat as credit would have gone to Jadeja if India had won the match. Sanjay yours new in list of Anti-Natinals.”

Manjrekar’s ‘bits and pieces’ reference to Jadeja had led to a Twitter spat between him and former England captain Michael Vaughan, who had incessantly trolled him on Tuesday after the cricketer from Gujarat bowled brilliantly against New Zealand in the semi-final. Perhaps fed up with Vaughan’s continuous trolling, Manjrekar had blocked him on Twitter.

India on Wednesday lost to New Zealand by 18 runs leaving the men in blue to return home empty handed. Not only did Jadeja bat brilliantly, but he was also exceptional as a bowler and fielder.