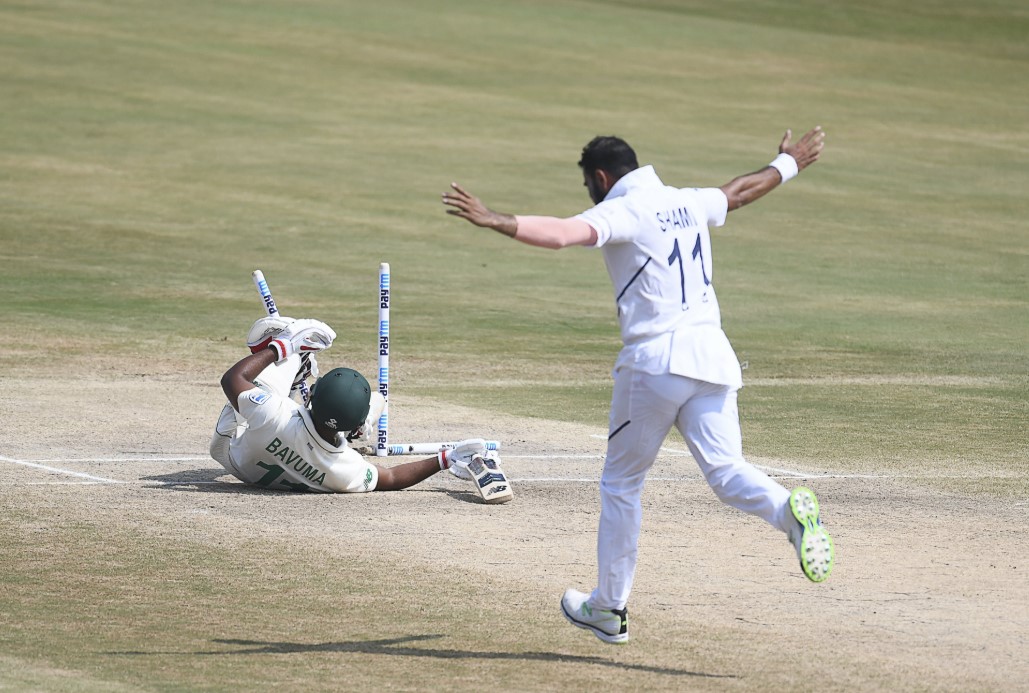 Resuming their overnight score of 11/1, South African batsmen found it difficult to face the Indian bowlers particularly Shami, who bowled three top-order South African batsmen namely Temba Bavuma, Faf du Plessis and the centurion of the first innings Quinton de Kock. The striking feature of Shami’s first three wickets was that he knocked off the stumps of all three batsmen.

Joining the party was Jadeja, who picked up three wickets in a single over as he got Aiden Markram, Vernon Philander and Keshav Maharaj out. He was unlucky to have missed out on a hat-trick chance. Earlier, Jadeja had sent Dean Elgar to the dressing room after getting him out for just two. Elgar was one of the two batsmen, who scored centuries for South Africa in the first innings.

Reacting to Shami’s bowling, noted commentator Harsha Bhogle tweeted, “How good has Shami been today. Has hit the stumps three times. India has so many bowlers to turn to now. Won’t be surprised if even Ishant has a role to play.”

South Africa needed 395 runs to win the first Test match against India, but their batsmen simply surrendered against the menacing bowling attack of India. Indian bowlers, however, struggled to get the South African lower-order batsmen out. South Africa’s number 10 batsman Dane Piedt became the top-scorer with 56 runs while spin-bowler Senuran Muthusamy remained unbeaten at 49.

The lower-order batsmen added more than 90 runs for the tenth wicket partnership.

Unable to get the South African lower-order batsmen, Kohli brought Shami back in the attack and he did not disappoint his captain and got both the tailenders out quickly, thereby picking up another five-wicket haul in his Test career.

South African captain Faf du Plessis said, “India batted really well in the first innings. We fought well but the second innings was tough. Rohit played really well. I thought up until this morning we competed really well. You can always sit after a game like this what you can do but apart from Shami this morning, the seamers’ job was of holding. On a day five pitch, things happen quicker, but it’s the nature of Test cricket.”

Rohit Sharma was adjudged Man Of The Match for his two centuries.

Reacting to India’s win, Virat Kohli said, “The wicket played really good for the first three days. We lost a session. When you put 500 on the board, you’re always ahead. Even with the fight they showed, we still had a lead. Rohit was outstanding. Mayank brilliant. It was a hard grind because of the conditions, especially the weather conditions. And the pitch slowed down too. It’s all about the attitude. If fast bowlers are going to think that spinners are going to do all the work, then it doesn’t justify their place. They ask for shorter spells so they can give 100%.

“That’s when you see guys like Shami, Ishant, Jasprit and Umesh as well doing well. It’s all about wanting to make a play for the team even in conditions that are difficult. Jaddu and Ash again, really good. The pitch was flat, they got a few boundaries away. Always knew it was going to be a second innings pitch. Shami has been a strike bowler in the second innings. All the guys lived up to their strengths. Batting heroes were obvious. But bowlers had it tougher in this game.”

For India, Rohit Sharma scored two back-to-back centuries and became the first batsman to achieve the feat in his first Test match as an opener.