Former England skipper Michael Vaughan has reacted angrily after a third umpire officiating a One Day International match between West Indies and Sri Lanka declared a Sri Lankan batsman out for causing an obstruction. 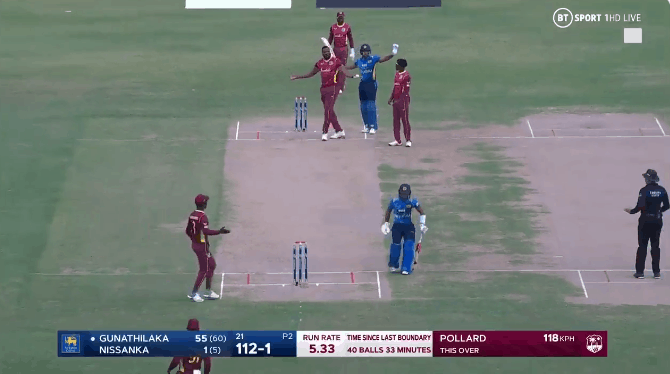 Dhanushka Gunathilaka was batting at 55 when he fell victim to a comical scene involving himself and West Indian skipper Kieron Pollard. Gunathilaka wanted to steal a single off Pollard’s bowling but changed his mind. However, the non-strike, Nissanka, had already reached the batsman’s end.

Pollard ran to collect the ball to run Nissanka out since Gunathilaka had changed his mind and was in no mood to complete the single. But, Pollard was unable to pick up the ball as it got pushed behind accidentally by Gunathilaka. Pollard appealed and the on-field umpire declared it out before referring the matter to the third umpire.

To the horror of cricket fans and Gunathilaka, the third umpire too concluded that he had deliberately caused the obstruction.

Even one of the commentators was heard saying, “well that’s a controversial decision by the third umpire.”

The decision triggered a widespread backlash from fans, who slammed the poor umpiring. One wrote, “Terrible call. It’s as if the umpires are West Indian.” Another commented, “Disagree – his first step is sideways across in front of the ball. He may not have known where the ball was – it’s harsh but I can completely see why it was upheld as infield umpires gave it out.”

The West Indies-Sri Lanka series was recently in the news after Pollard smashed Sri Lanka’s Akila Dananjaya for six sixes in an over during an extraordinary run-chase. He joined the likes of India’s Yuvraj Singh and South Africa’s Herschelle Gibbs by hitting six sixes in an international cricket match.