Australia on Saturday started their second innings in the first Ashes Test at Edgbaston with Steve Smith once again leading the Aussie charge against the hosts. At the end of the third day’s play at Edgbaston, Australia were 124-3 with Smith batting at 46. 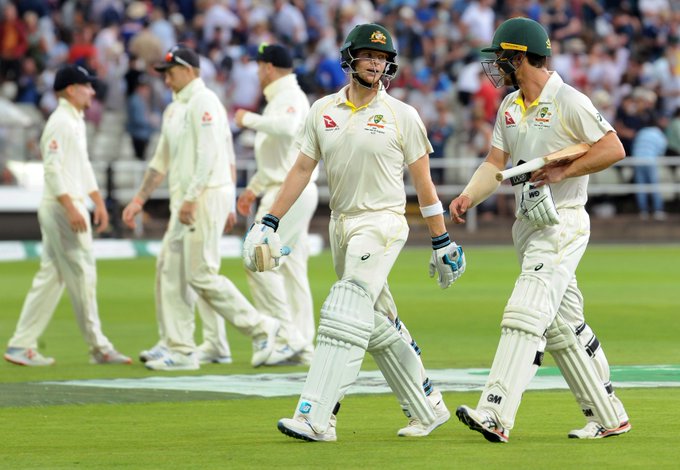 This was after England were all out for 374, taking a lead of 90 runs. Rory Burns emerged as the top-scorer with 133 runs with Joe Root and Ben Stokes scoring 57 and 50 runs respectively.

Australia started their second innings cautiously, losing three wickets early. But Smith, the centurion of the first innings, once again posed challenges to the English batsmen. The hosts are also without their lead bowler Jimmy Anderson, who had pulled his calf muscle and has only bowled four overs in this match. Anderson was seen struggling when he came to bat for England in the first innings.

Talking about his team’s strategy for day four, Chris Woakes told BBC, “If you could sort out a dodgy breakfast for him that would be great. We’ll go back to the drawing board and figure out what works best on this wicket. We might have to look to attack at one end and hold at the other.”

Aussie bowler James Pattinson said, “It’s about getting stuck in again and trying to bat all day tomorrow. Whatever lead we can get, it’s going to be a tricky chase. Steve Smith is a superstar and superstars peel off runs. He’s been waiting for this moment for a long time.”

England will aim to bowl Australia out as quickly as possible to ensure that they have a minimum total to chase. The wicket at Edgbaston has slowed down considerably and chasing anything in excess of 300 may prove to be a daunting task.