India’s stand-in captain Ajinkya Rahane received a hero’s welcome after returned to Mumbai from Australia on Thursday. Rahane, who led his side to 2-1 series win in the Border-Gavaskar Trophy against Australia, was welcomed with dhol and trumpets as he entered his housing complex by holding his little daughter. However, Twitter has exploded with praises for Rahane after many claimed that the stylish Indian batsman had refused to cut a kangaroo cake, made in his honour. 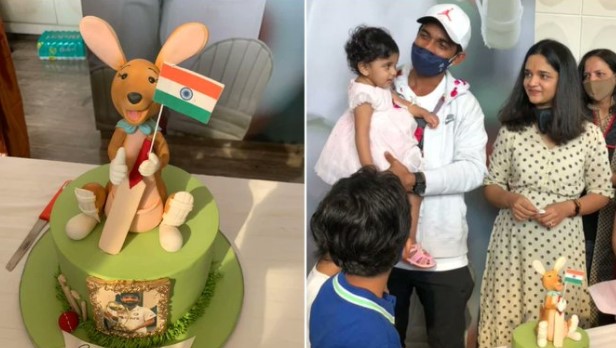 In the viral video, Rahane was seen standing in front of a giant cake, which bore a resemblance of a cricket pitch as a kangaroo sat on top of it holding the Indian flag. Mobbed by his neighbours and fans, Rahane greeted everyone but did not cut the cake until he made his way out of the venue. At one point, a woman was heard making reference to ‘kangaroo cake’ in Marathi language but Rahane responded by nodding his head in negative. Those proficient in the Marathi language said that Rahane had politely turned down the request to cut the cake.

His fans took to Twitter to appreciate his incredible gesture.

So Rahane refused to cut a cake which had a kangaroo on it. Ek hi dil hain Rahane bhai, kitni baar jeetoge❤️

What defines a player is not only his game in the field but the humility and and mutual respect shown in real life. Ajinkya Rahane by refusing to cut the cake with Kangaroo on top has shown it’s real life embodiment. Kudos ??
Link : https://t.co/n3FYCKO6Tx#AUSvsIND #Rahane pic.twitter.com/RuAg8xHkrt

My respect &love for rahane increased tenfold after he rejected
to cut Kangaroo Shaped cake pic.twitter.com/att5l9uVIn

As much as we love shithousery, glad Rahane refrained from cutting that kangaroo cake
Sets bad precedents for ahead

India’s woes were compounded by the absence of several big names due to injuries. They included KL Rahul, Ravindra Jadeja, Jasprit Bumrah, Ravichandran Ashwin, Mohammad Shami, Umesh Yadav among others. Not only Rahane led from the front by registering an emphatic win in the second Test, he also led his inexperienced side to pull off a thrilling win in the last Test match in Brisbane with a bunch of five inexperienced bowlers. Australia had never lost a Test match in Brisbane for 32 years.

Rahane had won plaudits from cricketers around the world for his decision to present Nathan Lyon, an Australian bowler, with a Team India T-shirt for completing 100 Test matches in his career.