In another shocking development, the content of the alleged leaked WhatsApp chat between Arnab Goswami and the former CEO of BARC, Partho Dasgupta, has pointed a finger possibly at a bigger corruption worth crores of rupees. This was after the chat between Goswami and Dasgupta claimed that former Information and Broadcasting Minister Rajyawardhan Singh Rathore had allegedly stopped a probe for fraud against the Republic TV founder. 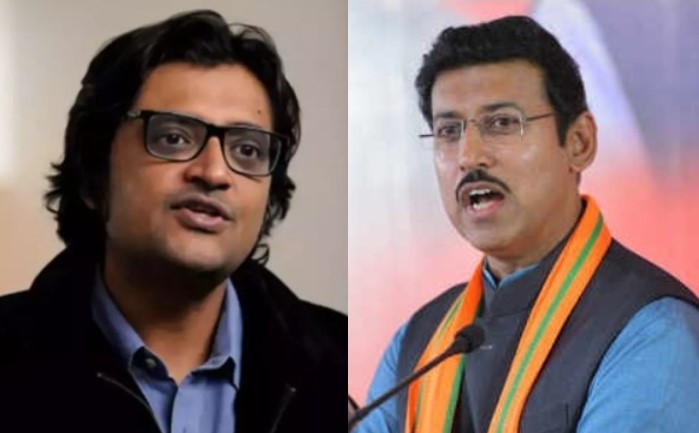 The alleged leaked WhatsApp chat showed Dasgupta writing to Goswami on 7 July 2017, “Apparently there is some complaint about Republic in ministry – it’s yet to be referred to us – one JS (Joint Secretary) told – but I think it will never come.”

Goswami allegedly replied, “About the dish fta [free-to-air] thing.” The Republic TV founder then went on to confirm that Rathore had indeed tipped him off about the fraud complaint. Goswami had added, “Rathore told me and said he’s keeping it aside.”

A report by Times of India said that Goswami’s Republic TV had gained illegal access to 22 million users of a Prasar Bharati-owned direct-to-home (DTH) service without paying the government for it. The report added that Goswami’s channel was broadcast in unencrypted form for two years on a bandwidth accessible to all users of the FreeDish service. Goswami had done so by managing to avoid the auction process, which entails paying Rs 8-10 crore annually to the government.

The I&B ministry, where Rajyavardhan Singh Rathore was the minister of state then, had reportedly received a complaint about the alleged corruption by Goswami but, according to the leaked chat, the minister chose to keep the complaint aside before tipping the controversial anchor off about it.

Srivatsa, a Congress functionary, wrote on Twitter, “#ArnabChatGate has a big evident case of corruption. Republic TV was caught illegally using DD’s Satellite without paying royalty worth 100s of crores to Govt in 2017. Arnab mentions he spoke to Minister @Ra_THORe who set aside the complaint. How much bribe did Arnab pay Rathore?”

#ArnabChatGate has a big evident case of corruption

How much bribe did Arnab pay Rathore?

Goswami has threatened to sue the Congress party and its leaders after Rahul Gandhi held an extraordinary press conference earlier this week asking if it was Prime Minister Narendra Modi, who had tipped Goswami off about the Balakot airstrikes. This was after Goswami’s WhatsApp chat revealed how he had predicted the Balakot airstrikes three days before the Indian Air Force launched the military operation in February following the Pulwama terror attack.