Former Union Minister Yashwant Sinha on Saturday formally joined the Trinamool Congress by severing his years of association with the BJP. Speaking to reporters, Sinha revealed how Trinamool Congress supremo and West Bengal Chief Minister Mamata Banerjee had offered herself to be taken hostage in 1999 to secure the release of hundreds of Indian passengers taken captive by terrorists. 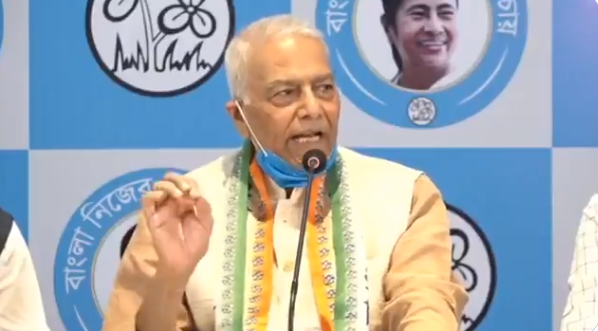 Sinha, who served as a cabinet minister in the Atal Bihari Vajpayee government alongside Mamata Banerjee during the hijack of IC-814 in 1999, said that the Trinamool chief had volunteered to sacrifice her own life to free Indian passengers.

“I want to tell you that when the Indian Airlines plane was hijacked and terrorists had taken it to Kandahar, we were busy discussing the issue in the cabinet. Mamata ji offered herself to travel to Afghanistan as a hostage on the condition that terrorists must release the rest of the hostages. She was prepared to give this sacrifice for the country,” Sinha said.

Speaking about her relationship with Banerjee, the former BJP leader said that he had worked with the firebrand Bengali leader in the Vajpayee government and knew that she was a fighter.

In 1999, terrorists had hijacked the IC-814 soon after it took off from Kathmandu’s Tribhuvan International Airport. They had a brief stopover in Amritsar before taking the flight with Indian passengers to Kandahar, the stronghold of Talibans in Afghanistan.

The BJP has always had to face criticism for surrendering before a bunch of terrorists by allowing a union minister to personally escort three terrorists outside India. This remains one of the biggest blots on India in its fight against terrorism.