The Karnataka High Court on Tuesday upheld the ban on hijab for female Muslim students saying that wearing Islamic headscarves was an essential part of Islam. 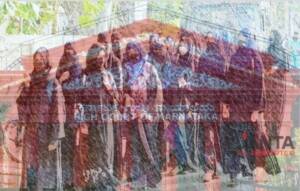 The court said that the Holy Quran does not mandate wearing of #hijab or headgear for Muslim women. “Whatever is stated in the above sūras, we say, is only directory, because of absence of prescription of penalty or penance .for not wearing #hijab, the linguistic structure of verses supports this view,” it said.

It added, “This apparel at the most is a means to gain access to public places & not a religious end in itself. It was a measure of women enablement and not a figurative constraint.”

According to the high court Bench comprising Chief Justice Ritu Raj Awasthi and Justices Krishna S Dixit and JM Khazi, wearing hijab was a cultural issue and had no religious significance. It said, “Regard being had to the kind of life conditions then obtaining in the region concerned, wearing hijab was recommended as a measure of social security for women & to facilitate their safe access to public domain. At the most the practice of wearing this apparel may have something to do with culture but certainly not with religion.”

“Thus, it can be reasonably assumed that the practice of wearing hijab had a thick nexus to the socio-cultural conditions then prevalent in the region. The veil was a safe means for the women to leave the confines of their homes,” it continued.

Herer are other key points of the order;

“What is not religiously made obligatory therefore cannot be made a quintessential aspect of the religion through public agitations or by the passionate arguments in courts.”

“What is made recommendatory by the Holy Quran cannot be metamorphosed into mandatory dicta by Ahadith which is treated as supplementary to the scripture. A contra argument offends the very logic of Islamic jurisprudence and normative hierarchy of sources.”

“it can hardly be argued that #hijab being a matter of attire, can be justifiably treated as fundamental to Islamic faith. It is not that if the alleged practice of wearing #hijab is not adhered to, those not wearing hijab become the sinners, Islam loses its glory & ceases to be a religion.”

“Whichever be the religion, whatever is stated in the scriptures, does not become per se mandatory in a wholesale way. That is how the concept of essential religious practice, is coined.”

Karnataka high court disagreed with the Kerala high court judgment by saying that the learned Judge(of the Kerala HC) himself in all grace states, “However, there is a possibility of having different views or opinions for the believers of the Islam based on Ijithihad (independent reasoning).”

“They have not averred anything as to how they associate wearing #hijab with their conscience, as an overt act. There is no evidence that the petitioners chose to wear their headscarf as a means of conveying any thought or belief on their part or as a means of symbolic expression,” it added.

“Pleadings at least for urging the ground of conscience are perfunctory, to say the least. The material before us is extremely meager and it is surprising that on a matter of this significance, petition averments should be as vague as can be,” the court said.

The Bench said that ‘we have no affidavit before us sworn to by any Maulana explaining the implications of the suras quoted by the petitioners’ side. Since how long all the petitioners have been wearing hijab is not specifically pleaded.’

It continued, “The plea with regard to wearing of hijab before they joined this institution is militantly absent. No explanation is offered for giving an undertaking at the time of admission to the course that they would abide by school discipline.

“There is absolutely no material placed on record to prima facie show that wearing of #hijab is a part of an essential religious practice in #Islam and that the petitioners have been wearing #hijab from the beginning.

“The school regulations prescribing dress code for all the students as one homogenous class, serve constitutional secularism.

“Schools are ‘qualified public places’ that are structured predominantly for imparting educational instructions to the students. Such ‘qualified spaces’ by their very nature repel the assertion of individual rights to the detriment of their general discipline & decorum.

“Why hijab can’t be given reasonable accommodation in schools? “Such a proposal if accepted, the school uniform ceases to be uniform. There shall be two categories of girl students- those who wear the uniform with hijab & those who do it without..”

The court also expressed it dismay ‘as to how all of a sudden that too in the middle of the academic term the issue of #hijab is generated & blown out of proportion by the powers that be. The way, hijab imbroglio unfolded gives scope for the argument that some ‘unseen hands’ are at work to to engineer social unrest and disharmony.’