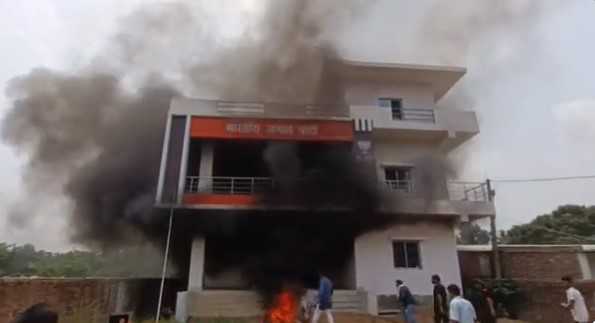 In the latest development, a group of violent protesters set a BJP office in Bihar on fire. the said office was located in Madhepura district.

#Agnipath Protests | A mob of over 500 protestors ransacked and arsoned the BJP office in Madhepura, Bihar. pic.twitter.com/5RfzLX1GDN

Angry protesters also burnt a road toll plaza in Sasaram district in Bihar. Earlier, they had set several trains on fire to register their protests against the scheme.

There are also reports of protesters burning trains in Uttar Pradesh and Telangana. At least person is reported to have died in the Telangana.

The police had to resort to lathicharge in Mathura in Uttar Pradesh in a bid to contain the violence.

In Danapur, near Patna, trains were burnt and damaged and protesters threw cycles, benches, bikes, and stalls on railway tracks, reported ANI.

Nine trains had to be cancelled and as many trains short terminated due to ongoing protests against the controversial recruitment scheme.