The video of former Trinamool leader Suvendu Adhikari being caught on Narada scam tape has disappeared from the official YouTube channel of the BJP, a day after he joined the saffron party in the presence of Home Minister Amit Shah. The development has not gone unnoticed with eagle-eyed Twitterati, who were quick to highlight the ‘chronology’ of the event. 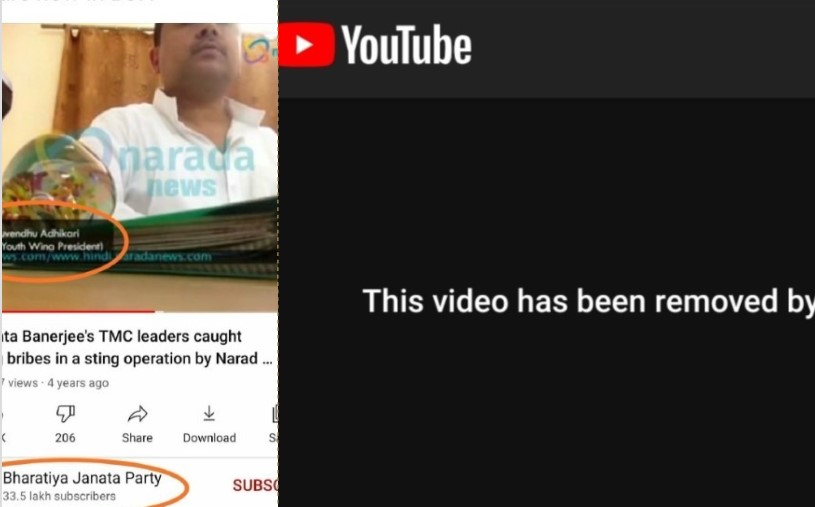 Adhikari (see the video below) was one of several top Trinamool Congress leaders, who were caught on tape by undercover reporters of the Narada website in 2016. The website had claimed that these leaders resembling Mukul Roy, Sultan Ahmed (now deceased) among others had accepted money promising to carry out lobbying work inside the parliament.

The CBI had launched an investigation in 2017 with the federal probe agency even seeking the Lok Sabha Speaker Om Birla’s permission to prosecute these leaders, particularly Mukul Roy and Suvendu Adhikari. Both Roy and Adhikari have since joined the BJP.

Delete these videos ASAP from your YouTube channel. Both Suvendu Adhikari & @MukulR_Official are now in @BJP4Bengal . @AmitShah @narendramodi Yehi tha party with a difference???

BJP is on the cusp of a ‘shaankher korat’ (double edged sword). The new vs old battle, the clamour for ticket, and to make-up with leaders they have been lampooning till yesterday. @BJP4Bengal youtube still has video of Mukul, Sovan, Suvendu taking bribe during Narada ???

The only videos on Narada now available on BJP’s YouTube website are by one Prime Minister Narendra Modi and Amit Shah’s interview with India Today.