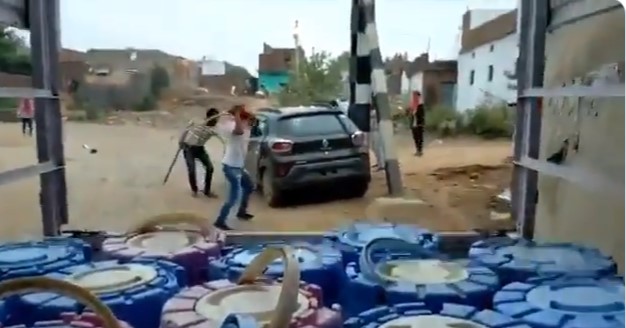 Quoting police, news agency PTI reported that Vishwakarma was returning in his car with his two other associates on Friday when he was attacked.

Pipariya police station in charge Satish Andhwan was quoted by PTI as saying, “The attack took place at around 7pm. A group of ten people attacked Vishwakarma and two others in the car with sharp-edged weapons. They then shot two rounds, one of which hit Vishwakarma in the chest, killing him on the spot. The other two also received injuries. The attackers fled.”

The police officer added, “We have registered a case against ten people and efforts are on to nab them. It may be a fallout of an old enmity between Vishwakarma and the attackers. He was the district in charge of the VHP”s gau raksha wing,” the official added.

Vishwakarma’s murder was caught on camera as an eye-witness captured the chilling development on his mobile phone. His attackers were also dressed in saffron, a colour usually associated with the Hindutva brigade.

A woman in the background is heard asking the man filming the matter to call the police.

VHP’s Gau Raksha Pramukh Ravi Vishwakarma attacked with sharp-edged weapons and then shot dead by a group of ten people in Pipariya when he was returning from Hoshangabad with Bajrang Dal General Secretary in a car. VHP’s Prant Sah Mantri Gopal Soni told it was a planned murder. pic.twitter.com/PmE0jGMZ8q

Vishwakarma was dragged out of his car before being killed. The man shooting the video is heard shouting, “They’ve killed him using a katta (locally made pistol).”

Madhya Pradesh is governed by the BJP.