The Trinamool Congress on Saturday won bypolls for both the Ballygunge assembly seat and Asansol Lok Sabha seat by a huge margin. The Congress won the Khairagarh assembly seat in Chhattisgarh and Kolhapur North seat in Maharashtra, while its ally, the Rashtriya Janata Dal, emerged victorious from Bochahan seat in Bihar. The BJP failed to win a single seat in today’s bypolls. 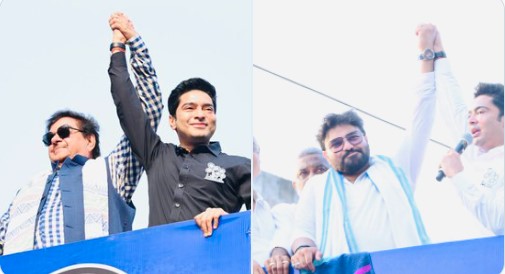 Babul Supriyo, who resigned from Asansol as a BJP MP to join the Trinamool Congress, was the TMC candidate from the Ballygunge seat. He defeated his nearest rival from the CPI-M, Saira Shah Halim, by over 20,000 votes.

Reacting to her party’s win, West Bengal Chief Mamata Banerjee said, “I sincerely thank the electors of the Asansol Parliamentary Constituency and the Ballygunge Assembly Constituency for giving a decisive mandate to AITC party candidates.”

She added, “We consider this to be our people’s warm Shubho Nababarsho gift to our Ma- Mati- Manush organization. Salute to the voters for reposing faith in us, yet again.”

The Congress won the Khairagarh assembly seat in Chhattisgarh and Kolhapur North seat in Maharashtra. Yashoda Verma of the Congress defeated BJP’s Komal Janghel by more than 20,000 votes in Khairagarh.

Jayshree Jadhav of the Congress defeated Satyajeet Kadam from Kolhapur North by a margin of more than 19,000 votes.