Tejashwi Yadav on Sunday ripped into Prime Minister Narendra Modi after the latter said in an election rally in Chhapra that Bihar was being run by a ‘double-engine’ government in a reference to the coalition government of Nitish Kumar’s JDU and the BJP. Tejashwi, whose popularity has seen a phenomenal rise in Bihar ahead of this year’s assembly polls, also embarrassed Modi by taking a jibe at the latter’s Motihari visit six years after he promised to drink tea using sugar made in the city’s defunct sugar mill. 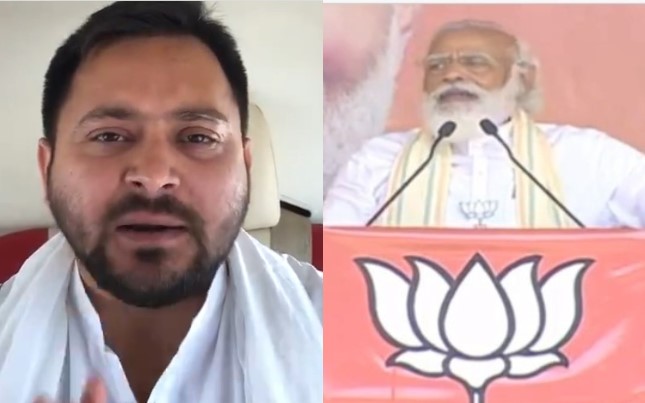 Addressing an election rally in Chhapra, Modi had said that whilst Bihar had a ‘double-engine ki sarkar,’ two crown-princes (Tejshwai Yadav and Rahul Gandhi) were fighting to save their throne.

Responding to Modi’s comments on the double-engine government, Tejashwi said, “Respected Prime Minister did not say why the unemployment rate has reached 46.6% in Bihar despite a double-engine government. Why are people migrating from every second home in Bihar? Why is Bihar number one in the list of crimes, according to the NCRB data? Why is Bihar lagging behind on the health front, as per the Niti Aayog?”

Tejshwi didn’t stop here. Reacting to Modi’s election rally in Motihari, the RJD’s chief minister face said, “Respected Prime Minister had said in an election rally in 2014 that he will start the operations in Motihari’s sugar mill, which had closed down, saying that he will drink tea using sugar from that mill during his next visit to Motihari. The prime minister came to Motihari today after six years but did not speak about the defunct sugar mill or tea.”

The three-stage assembly polls have started in Bihar, with the first phase of polls taking place on 28 October. In the remaining two phases, people will cast their votes on 3 and 7 November. The counting will take place on 10 November. This is the first assembly polls since the coronavirus pandemic claimed more than one lakh lives in India.