Tamil Nadu Chief Minister MK Stalin on Thursday thanked Rahul Gandhi for expressing solidarity with the people of the southern Indian state in his ‘rousing’ speech in parliament yesterday. 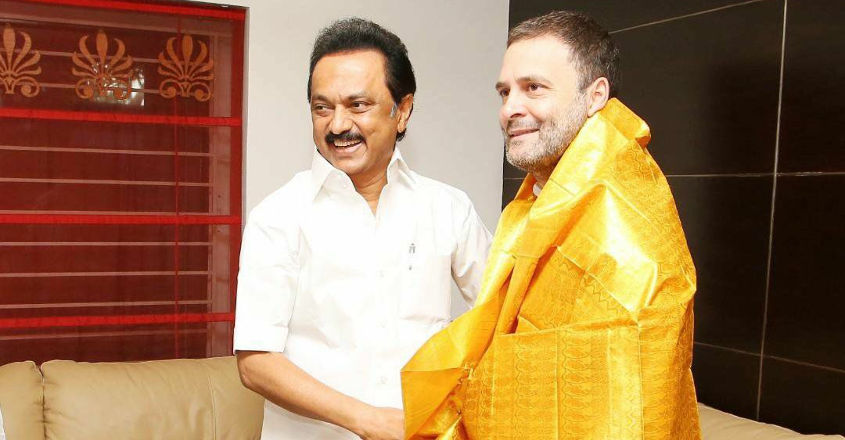 “Dear @RahulGandhi, I thank you on behalf of all Tamils for your rousing speech in the Parliament, expressing the idea of Indian Constitution in an emphatic manner.”

He added, “You have voiced the long-standing arguments of Tamils in the Parliament, which rest on the unique cultural and political roots that value Self Respect.”

Dear @RahulGandhi, I thank you on behalf of all Tamils for your rousing speech in the Parliament, expressing the idea of Indian Constitution in an emphatic manner. (1/2)

Gandhi replied, “The Tamils, along with the people of every other state of our country, are my brothers & sisters. I have no doubt that our shared belief in the pluralistic, federal & cooperative idea of India will triumph.”

Speaking in parliament, Gandhi had said, “There are two visions in this country. One vision is that it is a Union of States, meaning it is a negotiation, meaning it is a conversation, meaning I go to my brother in Tamil Nadu and ask, ‘what do you want?’ And he says, ‘this is what I want.’ And then he asks me, ‘what do you want?’ And I say, ‘This is what I want.’ It is a partnership. It is not a kingdom.”

Gandhi had also lashed out at the Modi government as he spoke about ‘Two Indias’. Speaking on the Motion of Thanks to President Ram Nath Kovind’s address in Lok Sabha, Gandhi had highlighted how there was ‘no longer one India.’

Stalin’s DMK and Rahul Gandhi’s Congress Party had contested the last assembly polls in Tamil Nadu as alliance partners and won a huge majority to form the government.