Uttar Pradesh Police have arrested the singer, who boasted about Hindutva pride and threatened to send Muslims to qabristan (graveyard) if they refused to chant Jai Shri Ram slogans. Police have arrested four people including the singer Varun Upadhyay alias Varun Bahar, the owner of the YouTube channel, where the controversial song was uploaded, Rajesh Kumar Verma, Santosh Kumar Yadav and Mukesh Pandey, who penned the lyrics. 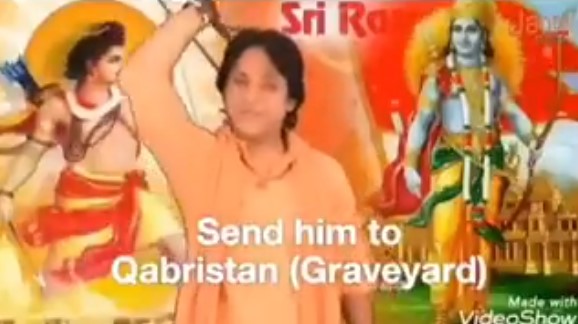 The video had gone viral on social media evoking widespread outrage. The song threatened to send Muslims to the graveyard if they refused to chant the new war cry Jai Shri Ram by invoking the name of the Hindu God Ram.

The owner of the YouTube channel and two lyricists are believed to the residents of Gonda in Uttar Pradesh, while the singer hails from Lucknow.

Killing Muslims after forcing them to chant Jai Shri Ram has become a new fashion of Hindutva zealots in India. Not too long ago, a Muslim youth Tabrez Ansari was lynched to death in Jharkhand. On Friday, a video of a Jharkhand minister CP Singh intimidating a Congress member of the assembly, Irfan Ansari, to chant Jai Shri Ram in front of reporters had gone viral.