Actor Rahul Bose recently hogged the limelight on social media for his tweet informing all how he was being charged a whopping Rs 442.50 for just two bananas by the JW Marriott Hotel in Chandigarh. Days later, the Indian tax authorities have raided the five-star hotel and seized all relevant documents for allegedly violating GST laws. 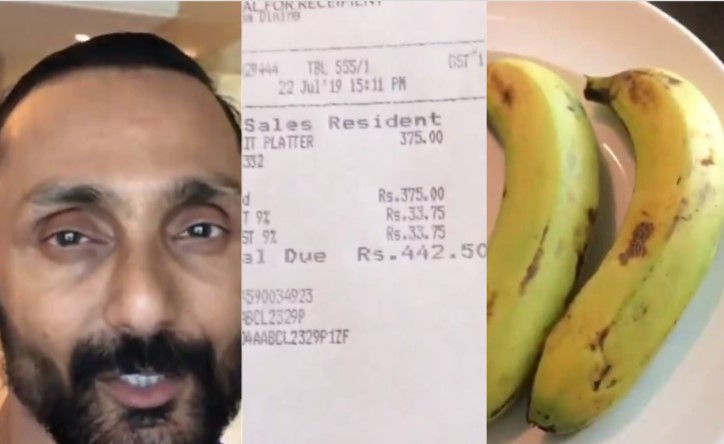 A report by Business Today said that the hotel may also face the music for violating the Consumer Protection Act, 1986.

In the video shared by Bose, the receipt for two bananas showed that the hotel had charged him 18% GST amounting to Rs 67.50 for two bananas while the total cost of the two bananas was Rs 442.50. Under GST law, fresh fruits are exempt from being taxed. The tax authorities are investigating if JW Marriott regularly flouted this law and made money out of their illegal practice. They are also investigating if the hotel paid the revenue earned from taxing customers illegally.

“ETOs have seized all relevant records. The question here is that fresh fruits are tax-free items, whatever the case may be, and ‘fruit platter’ is not a taxable item. But the actor has been given fresh fruits and tax has been charged on it so we are investigating all angles. We are even probing whether relevant tax is being deposited regularly with the excise and taxation department or not,” AETC Chaudhary was quoted by Chandigarh Newsline.

Bose had shared a video of himself from his hotel suite on Sunday stating how he was being charged exorbitantly by the hotel for two bananas. His tweet had read, “You have to see this to believe it. Who said fruit wasn’t harmful to your existence? Ask the wonderful folks at @JWMarriottChd #goingbananas #howtogetfitandgobroke #potassiumforkings.”

You have to see this to believe it. Who said fruit wasn’t harmful to your existence? Ask the wonderful folks at @JWMarriottChd #goingbananas #howtogetfitandgobroke #potassiumforkings pic.twitter.com/SNJvecHvZB

He was heard saying in the video, “So I am shooting in Chandigarh and I am staying at this beautiful suite at JW Marriott where they give you all these elegant freebies like these chocolate cookies. God knows how much these beautiful flowers must have cost, but get this, I was in the gym and I asked for two bananas and check the bill out.”

Meanwhile, the hotel has been given time till Saturday, July 27th to reply.